GavinR wrote:This week I've spent a couple of evenings extracting the Jag axle (after peering through the filler plug hole and seeing a nice shiny cylindrical casing very close to me

) and took it down to the workshop, nearly strained something putting it in the back of the Scorpio, it's a lot heavier than the Atlas axles I run on the Mk2 Escorts 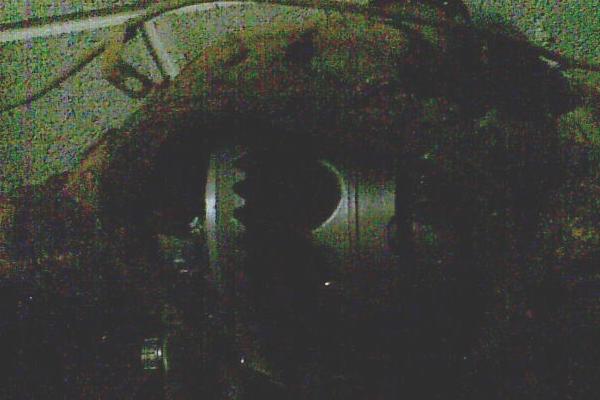 And one of the Scimitar Diff 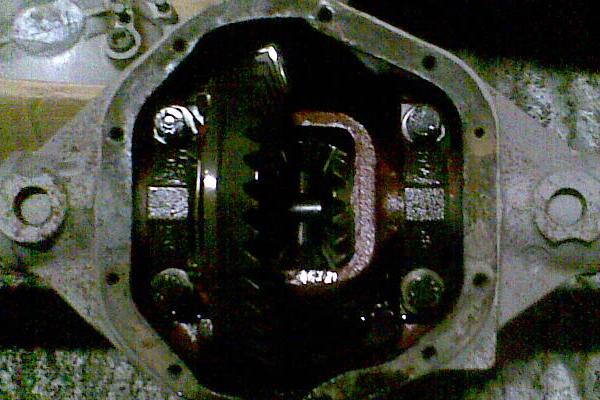 I checked how tight the LSD was and it was still solid at 80 lb ft, I couldn't hold the axle well enough to go any higher and for all I know it's rusted solid, so today I further stripped the Jag axle, removing the brake calipers, handbrake cables, couldn't get the hubs off the shafts but managed to unbolt the bearing retainer and push the shafts out using my 4 ton port-a-pack against the tramp bar brackets

Now I just need to find someone near Bristol who can swap the LSD into the Scimitar axle as it's not something I'll trust myself to do, and it needs a new pinion oil seal as well


I just swapped from one 4HA into another

Coupe' Racing wrote:
I just swapped from one 4HA into another

I decided that would be risky as if the casings are a fraction different then the preload on the diff bearings would be wrong and also the crownwheel & pinion mesh. I dropped everything off to a friend last night and he knows someone who can do it properly and it won't cost much either

The other night I had a marathon painting session on the chassis, 2 coats of POR-15 Rust Proofing and 1 coat of Chassis Black should keep everything protected for many years 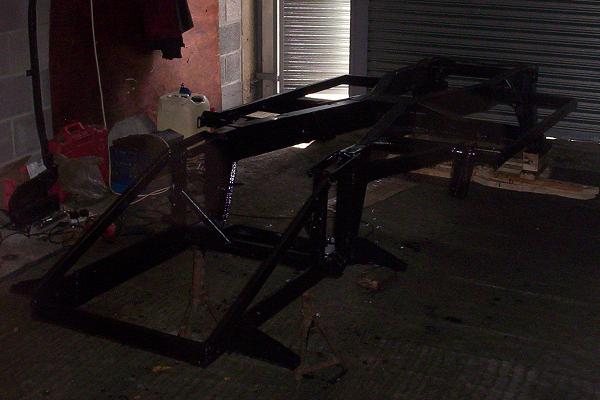 Then last week I spent most evenings fitting 21 Poly Bushes to the suspension arms, all the old Metalastic bushes in the 6 link bars took a while to remove, but once it was done I assembled various parts ready for painting 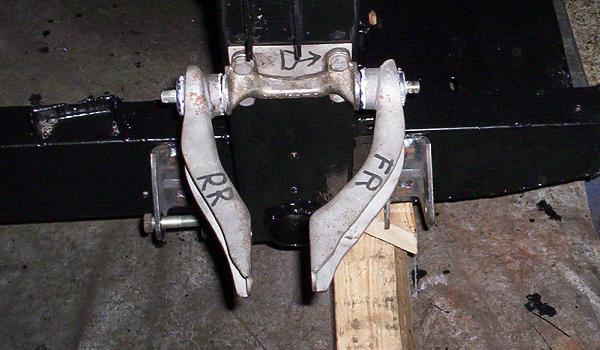 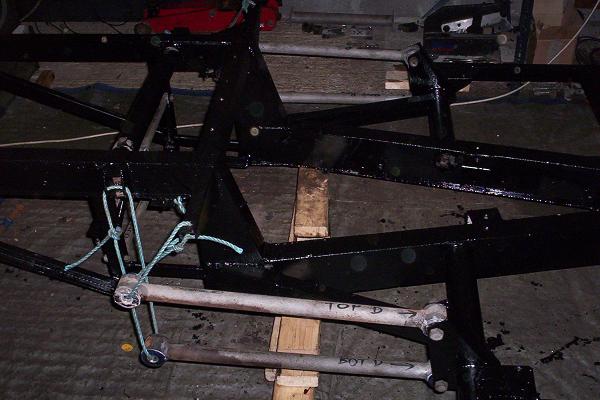 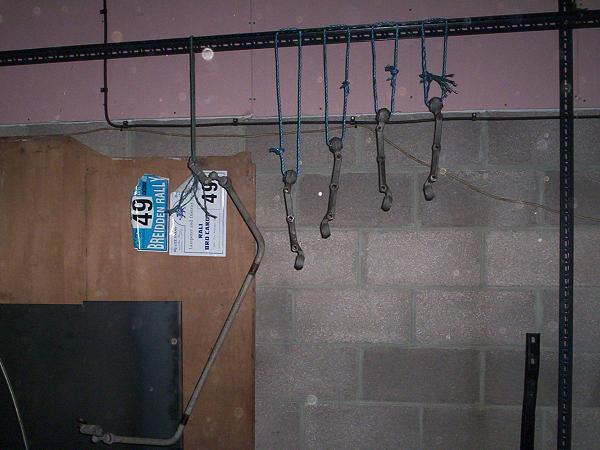 Both front shock lower mounting plates had seen better days, and although new ones are available I thought I'd save some money and repair mine, the drivers side was the worst with rust pushing the 2 plates apart, so I ground through the original welds and split them 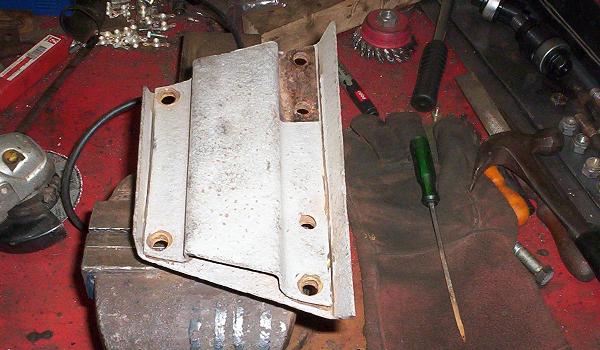 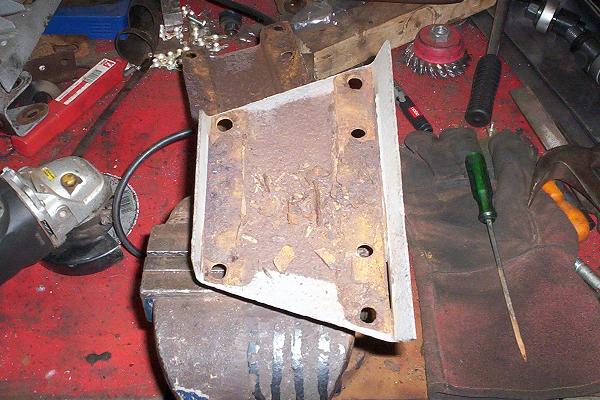 The shock mounting sides were also bent on both plates so I cut them off, dug out 2 good lower wishbone brackets which are a similar profile and ground the bolts off them - I've got 4 new brackets so these were spare 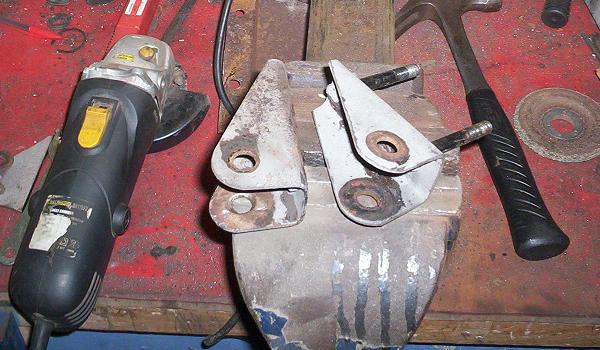 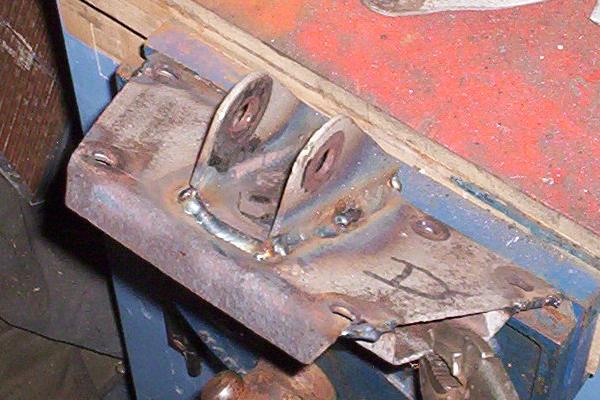 Some more work on the replacement sill reinforcement plates - as the folder I've been using can only bend 2ft lengths I had to do these in 2 halfs and weld them together, should be fine when it's all fibreglassed 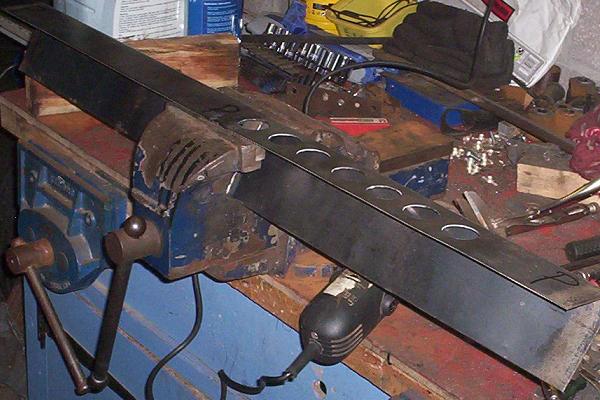 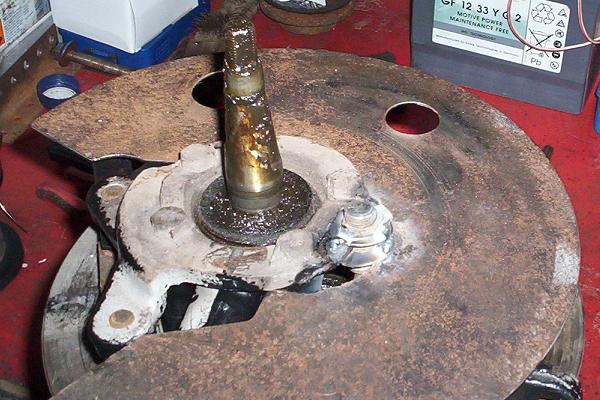 Wired up to the trip and it works :thumb: 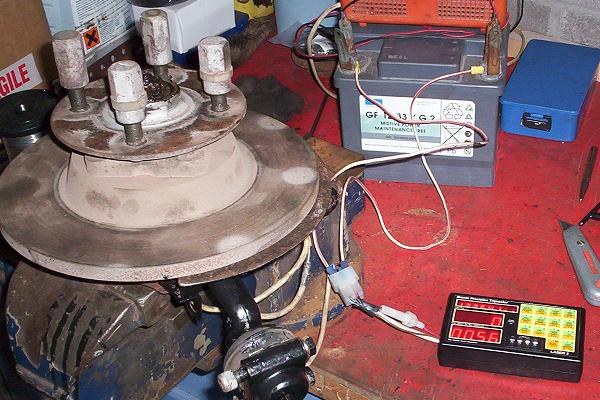 And the front suspension is now bolted on with calipers and pads, after some fun assembling the trunnions - the springs look odd as they are some 2.25" ones I had lying around and the shocks are designed for 2.5" ones, but it should give me an idea of what length and rates I need 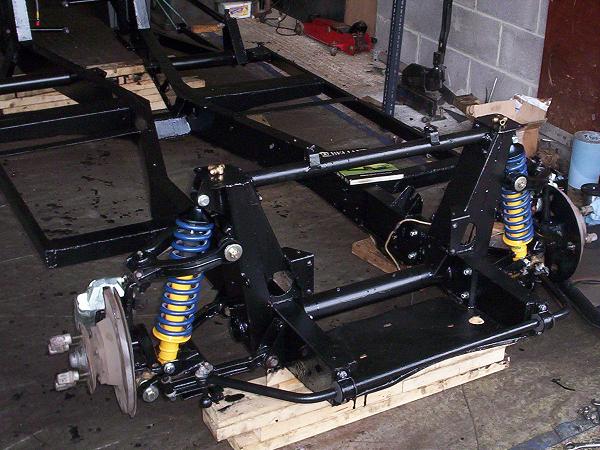 Thats some awesome work Gavin and you seem to be going at one hell of pace too!

I thought I'd better mention though that I used some lower wishbone to chassis mounts in place of the old rusty lower shock mount. After welding it on, its became apparent that the old shock mount was over 3mm thick and the chassis mount are more like 2mm thick. So I cut them off and put something thicker on.

I'm sure it would be fine, but after I noticed it, I couldn't help myself and had to change it. I just thought I'd mention it!

Keep up the speedy excellent work.

Thanks for the advice, but on mine everything is 2mm plate so I'm happy it is as good as the originals, maybe later cars had thicker ones. I'll keep an eye on them though!

The plan for today was to bolt the engine to the chassis - although the engine that came with the Scimitar runs I don't know how good it is so I bought another one off eBay in January which has been mildly tuned by John Wade. The engine had previously lost a core plug from one head so the seller suggested I replace the others in case they were about to fail. I changed the other 3 in the heads and 4 in the sides of the block but left the 3 rear ones as I didn't fancy removing the clutch and flywheel to get to them. I also fitted a new thermostat and removed a bung from the water pump - the previous car wasn't running a heater so didn't need this outlet 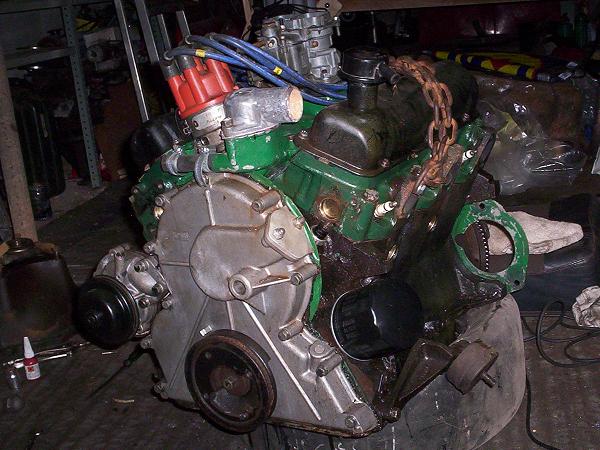 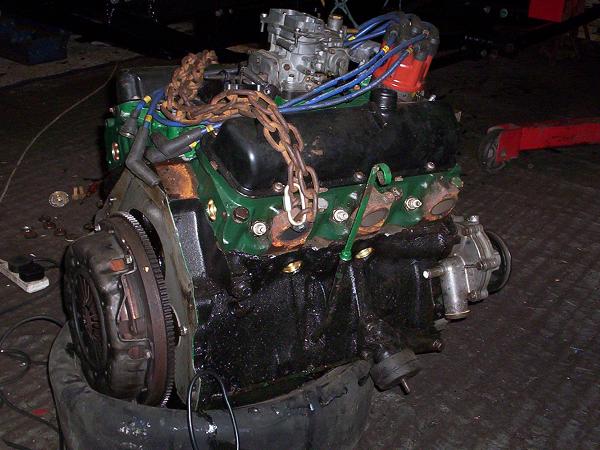 I had a look at the gearbox as well, the linkage is a nightmare with external rods, levers and nylon bushes everywhere, one bush was completely missing, the spring clip had been replaced with a twisted split pin and the rod was bent 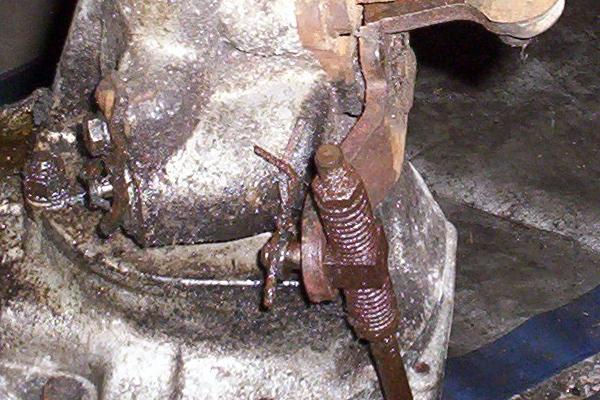 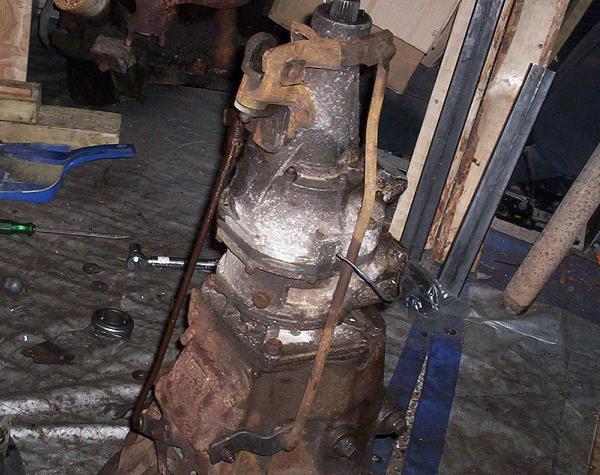 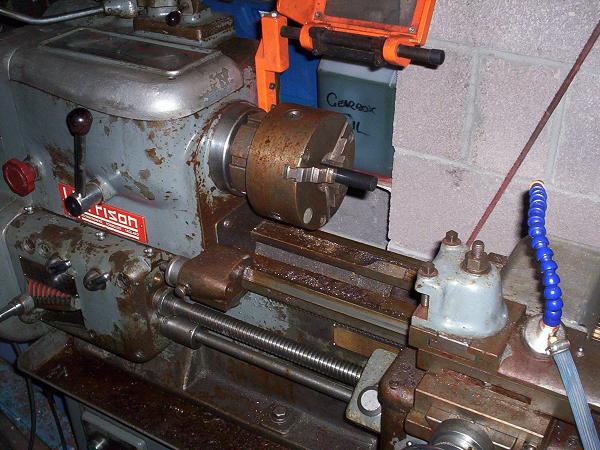 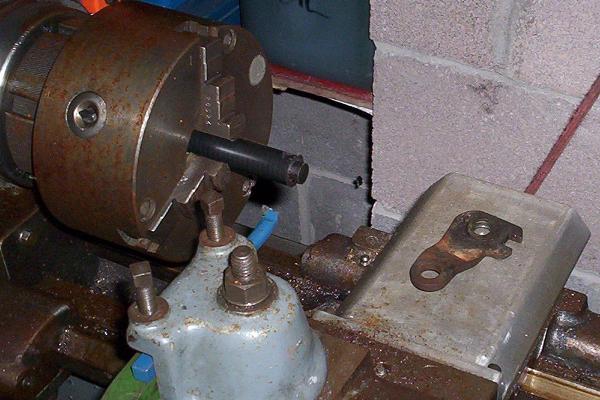 Drilled the centre for the pin and fitted it all together 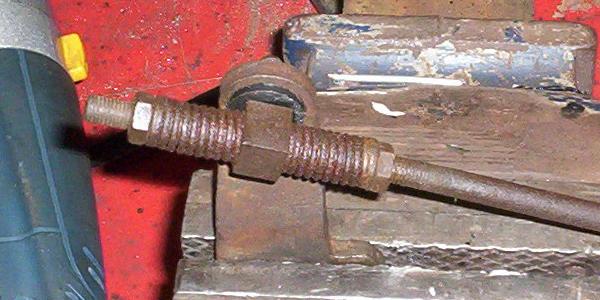 Linkage is now back on the gearbox, the rod is straight, I just need to find another spring clip to hold it on properly. Some of the other joints had some play, or the spring clips weren't tight against the bushes so I've spaced them with washers and greased everything in sight, hopefully I'll have a decent gear change when it's all running

So no engine installation but hopefully one evening this week...

I can't believe you didn't change the rear core plugs (only 2 hold water - the other is the rear of the cam - but there is another in the block at the front) while the engine was out? You know what will fail first

The core plugs I changed didn't look too bad, the one that failed came out instead of rusting through, so we'll see how it goes. I'd spotted the one in the front of the block but I'd need to remove the timing cover to get to that but I didn't realise one of the rear ones was for the cam

ah - I thought you meant it had rusted out 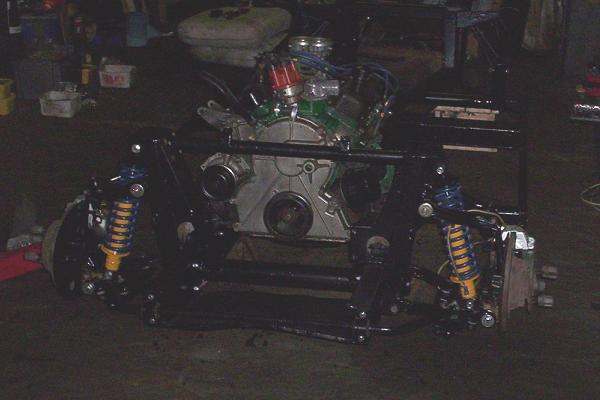 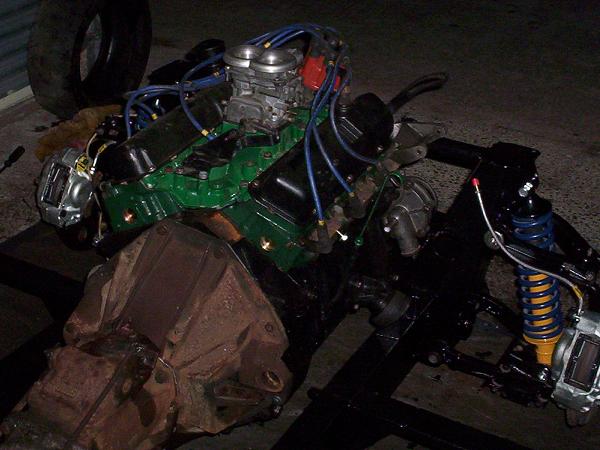 I was going to ask why you have an early front cover on a late engine - but I guess that's just how it came?

Just about to start my se5, laid up since '88 (once ive built my new workshop

) so will be following this with intrest.

Im new to scimitars so very helpful to see a near step by step guide, should save me many hours when I come to tackle mine.
Noting worse than statrting an unfamilir car with no previous knowledge, Ive restored over 20 vw beetles, and know every nook, cranny, nut and bolt now. You never know, maybe I could do 20 scims

Thanks for all the pics, Ive done many "online restorations", some with over 300 pics so I know and appreciate the effort involved in sharing your progress.

Especially on a short deadline, I restored a mk3 escort rs1600i twice in 3 months( yes twice, due to a major fuel fire

This starts with the a pic of the 1st completed restoration

Good luck with the build, Intrested to see what colour you choose!

I was going to ask why you have an early front cover on a late engine - but I guess that's just how it came?

I like the trumpets as well, look to have been turned from a solid lump of ally, a lot better than the usual cut and welded ones I've seen
They will be covered by the tallest K&N I can fit under the bonnet, but currently I'm having trouble finding one for a 40DFAV carb

Yes front cover was on the engine and the engine mounts look odd as the chassis mount triangulation covers part of the rubber in the pic, they're pretty good and everything sits nice and level

Lee - I had a look at your thread, I think you'll find a Scimitar very simple compared to some of the cars you've done before, and there's a lot of other projects on here with pics that I've found very useful when taking mine apart

At the moment it will stay Red, I'm not going to have time or money for a proper paint job so I'll just have to tidy up what's there for now

So I've made some progress this week but had a few problems as well...

Bolted some more bits on the engine, brand new inertia starter (this may seem a strange choice and the engine was running a £200 gear reduction starter which the previous owner kept for his new engine, but I have a plan

), both manifolds, alternator with a new fan belt and a new slave cylinder (from Powertrack brakes). Then I fitted a water take off to the inlet manifold to replace the plug and make the heater work, but as it's a NPT thread the further you screw it in the tighter it gets and I just needed a fraction more to get the angled fitting pointing the right way when it snapped off in my hand

10 min later I'd drilled it out and refitted the plug for now... 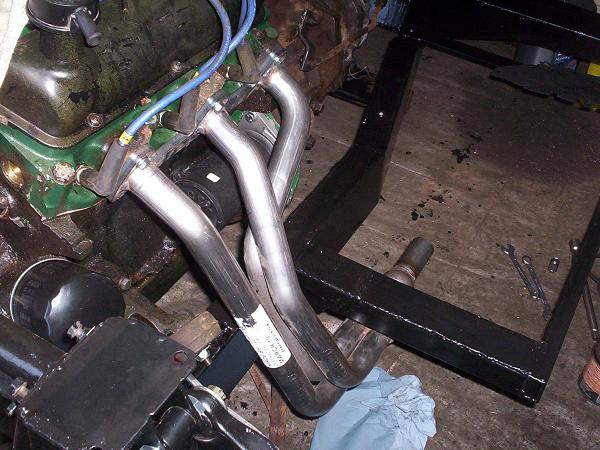 I'd ordered some new bump stops from QRG and I assume these are the only ones available now but it didn't take long to make them fit, bolt them to the rear chassis and add a coat of paint 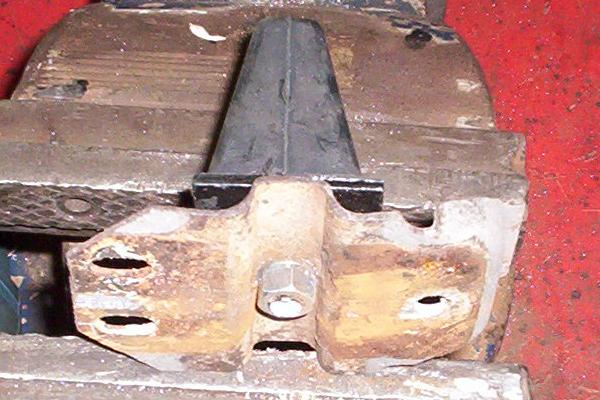 Then I mounted a spare Red Top fuel pump on the rear chassis, I'm assuming this position will be far enough from the axle as the brake flexi hose is in a similar position the other side, and I've now run a fuel hose to the carb via a regulator which is set to 4.5 psi
Next was to investigate the fuel tank - I cleaned it up and it didn't look too bad, I know it doesn't leak as it came with some petrol in which I'd disposed of previously, so I added some fresh fuel, sloshed it around and tried to pour it out of the fuel feed pipe, but nothing happened. I tired blowing down the pipe and with a foot pump but it is completely bunged up and after removing the fuel sender unit and having a look inside it is quite rusty so I'll have to find another one and I've put something in the wanted section 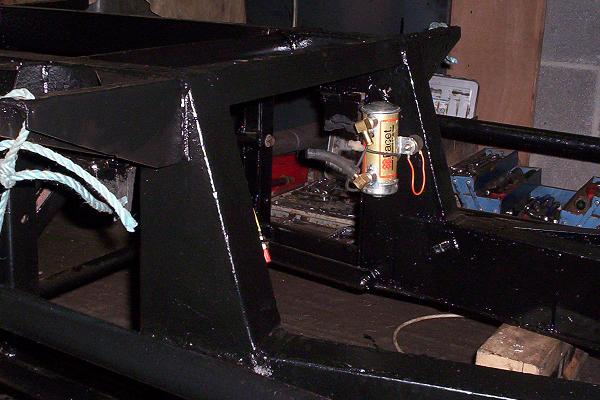 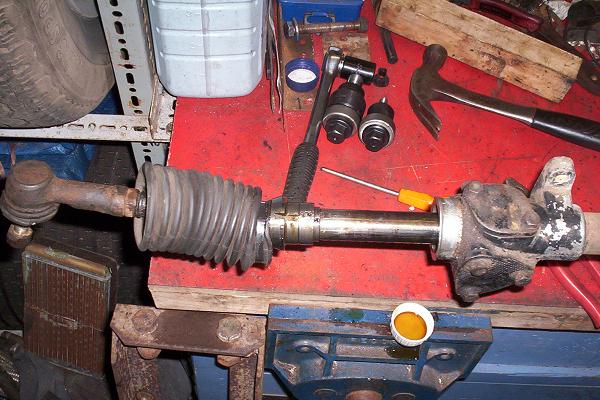 Last week I'd taken the rad, heater core and expansion tank to Arrow Radiators in Avonmouth and they've done an excellent job reconditioning everything - the rad has a new thicker core, the heater was completely blocked and the end tanks had started to split so they made up a new one exactly the same size and fitted the tubes from the original one, and the expansion tank was dismantled, bead blasted, straightened and resoldered - not cheap but everything is now better than new 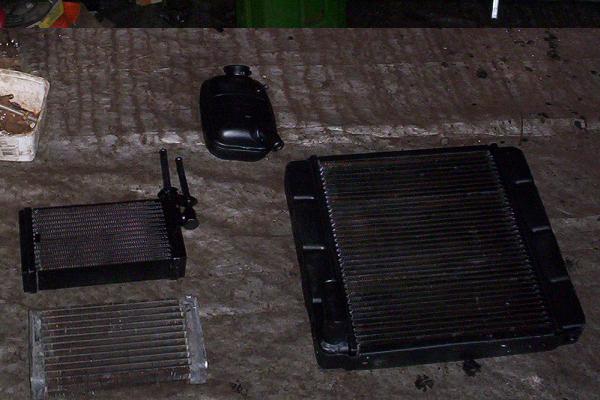