Cheers, exactly which bit did you cut?

I cut the wheel aperture of the original wing too big, Martin Ford, the scrutineer that replaced my chosen log booking scrutineer at last minute, showed me msa reg that the original.wings can only be cut enough to allow clearance for larger tyres. I argued that as the outer wing was full around the wheel area, but he wouldnt have it (rightly so).

I believe you need the original wing in as complete a state as possibly, and then the outer wing is a 'flare' and you cn chop and change that almost as much as you like.

If im honest, i think he was a stickler, bordering on the pedantic as id added 2 x almost whole rear wings over the originals, but the originals pribably had 2"-3" clearance releived over stock. I never thought about it, just merrily chopped away plenty of clearance

As it was it didnt affect me adversley, as i was able to get a Nat A open licence suitable for sports libre, so the car was logged booked as libre and not mod prod

Someone has the rear wings for a guess, Jim, Phil A or Nick K? I did renove a bit more material if i recall to allow the air ducting from forward wing aperture to rear radiator duct. Will see if i can find old pics

I had them for a while before I think Jim K ended up with them?

Only pic I have on file.

Don’t think I have them? Daryl had the bonnet and nose off me recently but I still have the chassis as a mock up tool.

Well they didn't just grow wings and fly away.....

I had the doors, diffuser, and roof; but not the rear wings...

So yesterday was the big dyno day, both of us have been very nervous for a while now and were fully expecting something to go wrong given the untested gearbox/ clutch package, freshly built hybrid engine and past form ie Omex screwing us over with injector 4, issues with the engine build, Covid etc. First issue a day before the dyno the transport guy drops the bombshell that his missus has booked them a weekend away and he can only take us but not bring us back, more on this later. The day finally comes and the driver is 40 minutes late

luckily the car went on easily enough and we made it in one piece: 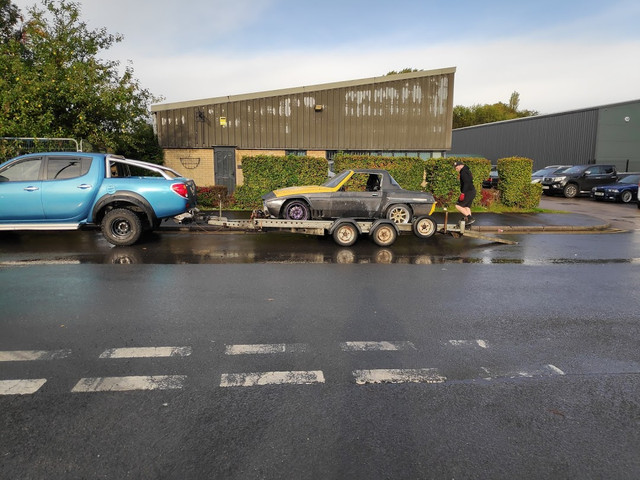 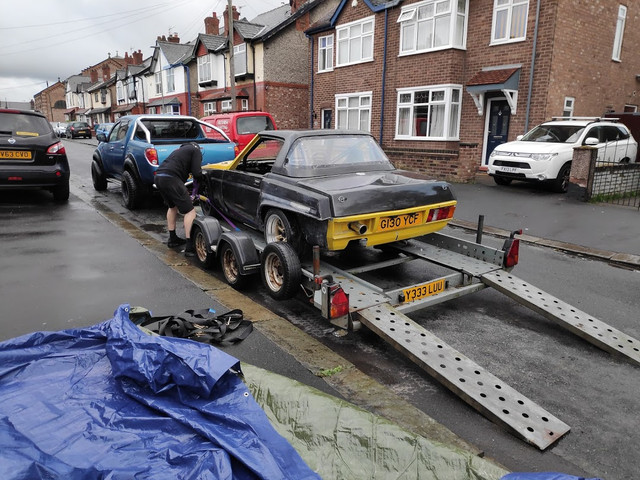 On arrival at ChipWizards Wayne the owner immediately says "oh I used to race against one of these in the late 80s" what I didnt know about Wayne prior to this is that hes an avid compie and has been for decades, even cooler it turns out that the SS1 he was referring to was the legendary Graham Walker SS1. we wheeled the car into the dyno cell and spent longer than we should have discussing all things sprinting and eventually got onto aero and suspension setup and it became immediately obvious that this guy is impressive and he had alot of advice to give. He has worked on all sorts in a professional capacity, F1, group C, DTM, another quote "you will struggle to find an M3 touring car that I have not worked on" Porsche even send museum cars to him when they have ECU issues that even they cant fix! Recently a Porsche GT1 and he said that hes due to take delivery of a 959 soon for the same treatment, hes also worked for Porsche motorsport directly too so I was immediately put at ease. We got talking about sprint cars that hes built and onto his current bonkers Hyabusa powered Suzuki Cappucino, F1 suspension components including uprights, so cool 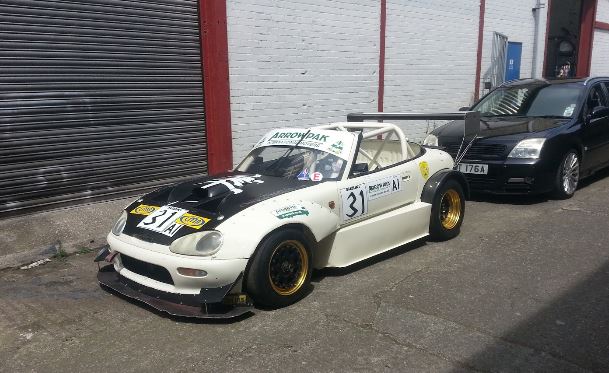 We sat and watched from the waiting room while he did the obvious checks, static timing, leaks and anything that might be considered dangerous, the only issue being that the timing was a few degrees out: 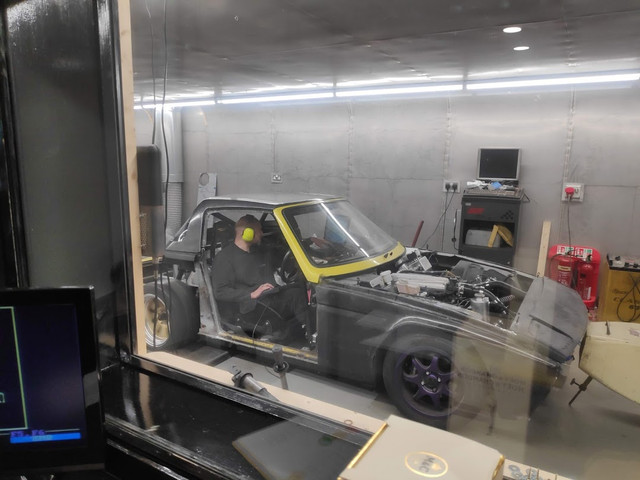 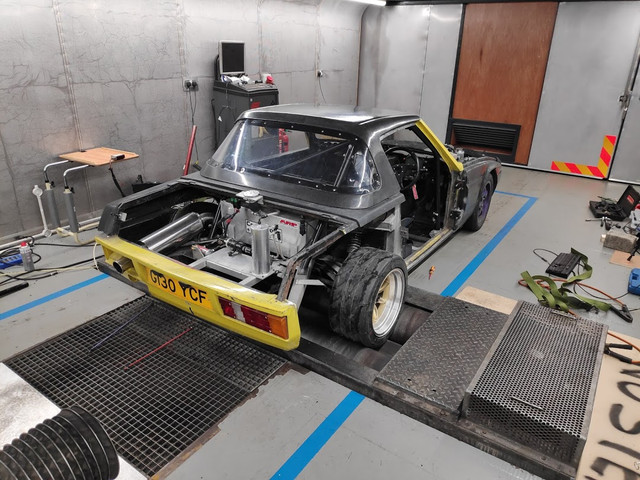 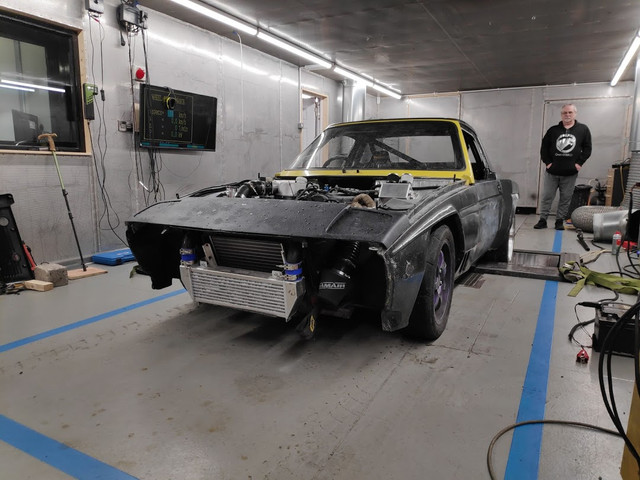 Unfortunately once he started running the car higher in the rev range during fuelling setup a pronounced miss fire developed north of 5,000 rpm, he stopped and pulled the plugs, narrowed the gap which didnt really improve things much, eventually the culprit was found to be the crank sensor flopping about, the sensor mount is solid, easily enough to lift the engine on but the sensor itself in Ford applications is designed to sit within a tube not just clamped with one bolt, he did a few more pulls with the same issue and suddenly we lost the clutch and as a result that was pretty much as far as we got, we think that the concentric slave has over extended and the seals have popped out spewing clutch fluid on the floor so we have purchased one better suited to the job, unfortunately it means taking the car apart again but thankfully we do have those velcro engine mounts to help us along! Now lets discuss the elephant in the room, what did it make? ..... we did record one of the runs but there are several things to point out (yes you could call them excuses) firstly he was still in the process of sorting out the fuelling and as such hadnt increased the boost beyond wastegate pressure which is currently 10psi, secondly there was that missfire and lastly it turned out that we had a reasonable boost leak between the base plate of the plenum and the inlet runners so yes that is getting welded right up, but ultimately 250.8bhp at the flywheel and 222.7BHP at the wheels which is a whole 13 more than we had last year at the flywheel, every cloud has a silver lining and excitingly there seems to be alot more to come so 250 is a nice starting point: Lastly but definitely not least Mr Ben Curry came to our rescue and returned the car home, I cant thank him enough and I owe him many favours, what a hero! So, next steps, Wayne suggested we get some cooler plugs, he wasnt happy with BCPR7ES, I need to rip and separate the engine and box, we might need a new friction plate given it could be contaminated with fluid its rated at 300ft/lbs so now might be a good time to fit something beefier, the induction side will be going back to the fabrication shop to sort that boost leak and dad needs to weld a tube onto the crank sensor bracket to stop it flopping around. Wayne said he will only need a couple of hours on it and even offered to do it for free! I declined his offer though, he deserves to be paid.

Not sure yet, hes asked me to ping him a message.

its not some warmed over euro box, theres lots of fabrication, non original bits and potential for the F**k Fairy so i wouldnt be disheartened. Repair and regroup and go again

You shouldnt need 8s, but if you want to try them, just use BCPR8ES. Other variants are just more trick materials really for longevity, wornt run any different on new above or new iridiums or multi prong, although may stop drop off in performnace in 3000 miles.
Tbh i use the std plugs and change regularly, modern plugs don't ever recover from being fouled, so esepcially whilst mapping where rich running or out of kilter timing, pointless putting 40 quids worth of pkugs in to foul.

Ref 8s, i ran them in my CVH racer, but on cold spring/autumn events it would barely start on them, so ended up starting and warming on std 6s then swapping plugs, proper faff. With ecu management once its mapped it *should* be tight enough parameters to start ok and run up, youll just have to see, few sets of plugs in the race box isnt a bad thing

I use the EIX range (7’s) after silly misfire issues in the early days:

I have to say JDM garage were very helpful with advice on the most suitable for my RB25DET.

Don’t be too upset, the cars a credit to Poppa Crosby and you. You will defo get there!

“It's not the winning, it's the taking apart that counts"