well i fitted the new carb (mid Jan) but nothing else from the Christmas list- but no matter what i tried could not start the car!!!...so carried out the the usual diagnostics:

1.Checked for fuel flow - primed via electric pump- all OK when i operated the throttle
2.Checked the Lumenition for spark generation - all OK when the optical sensor was interrupted
3. Attached a spare lead and plug to the no 1 distributor cap- all good when cranking- a nice fat blue spark
4. As well as i could checked the pipes for any possible air leak sources or blocked them off

so i was lost to think what to do next...

5. reset the carb settings as specified by AJL's PDF - no change

nice)- i asked her to crank it continually as i twisted the distributor - and eventually it burst in to life but it was cranking for 2 mins before it would run on its own accord - but bit lumpy etc, but i was alive once again

- the oil pressure was good as before

i tightened the clamp bolt as best i could - but was still able to rotate it albeit with more effort...so as i have the megajolt setup for the TR- i decided to buy a EDIS-6 module already wired up with the molex plug...just the coil pack\crank sensor and wheel left..

So next job will be complete the remaining 'Chrsitmas list' and recheck timing\tappet clearances..

But happy it started - but that was yesterday.....

any tips\pics for the crank sensor\ wheel setup would be helpful..

my waaay over the top engine\body hoist.... 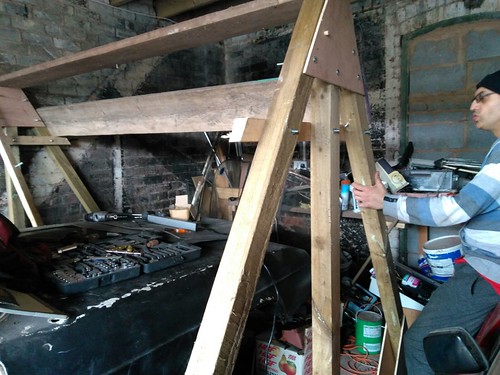 initially will be used to lift the body at the front ...then modified to lift an engine - its 90% finished - like most of the stuff i start

I came unstuck with a loose dizzy in a similar way - I'm pretty sure I clouted it with the spare wheel, lol

I came unstuck with a loose dizzy in a similar way - I'm pretty sure I clouted it with the spare wheel, lol

yes...i read that in your post...mine seems reluctant to stay put

.. need to check if a spring washer can be squeezed in there..although it frightens me to remove it...

BTW like the new wheels...i looked at a yellow one ( 2002) a few months back..but as i have no garage and live in Smethwick..decided against it...

This reminds me of a problem I had years ago

The problem was this :
Over time the bolt had stretched and bottomed out in the block before it snapped
I would cut a thread or two off the bolt and see if you can achieve full tightness
Easy to remove with a magnet on a stick

Coupe' Racing wrote:This reminds me of a problem I had years ago

The problem was this :
Over time the bolt had stretched and bottomed out in the block before it snapped
I would cut a thread or two off the bolt and see if you can achieve full tightness
Easy to remove with a magnet on a stick

oooh that never occurred to me - but now you mention it - my clamp bolt has a recess for a flat head screwdriver as well?? ( not original?)- so the same affect could be achieved by a spring washer? i will remove the bolt\screw over the weekend

Ooh I will find out if it still exists!!

According to DVLA it's taxed and MOTed, so it looks quite likely?

oh and welcome to the forum, StevieF

Roger Pennington wrote:According to DVLA it's taxed and MOTed, so it looks quite likely?

oh and welcome to the forum, StevieF

humm...my MOT chap who saw the car ( when i posted originally) - said it was 'in pieces...' but that could subjective i guess- but i am planning to meet up with the current owner in a couple of weeks.

Thanks very much for the feedback and thanks for the welcome, a 60 year old woman suddenly attempting a forum is scarey all round..
My Dad was 39 when he bought the newly registered ROE425M in 1974 from 'Flights' in Handsworth (at the age of 17, I personally preferred the Datsun 240Z that was in the showroom at the time).
It was reluctantly passed on in 1995 when he retired and needed a more 'practical' car.
There are so many tales to tell.
My Dad is now 82 and was nearly lost to Mom and I last August but after a 13 hour op to rebuild his heart is making a spectacular recovery.
I know this is a ramble and I'm probably breaking all forum rules but I just wondered this morning where 'the Scim' was and found Manny's post - I frantically joined here in the hope that she's not quite gone.
So much heart.
Any updates would be much appreciated, thanks.
Last edited by StevieF on Sat Apr 01, 2017 6:13 am, edited 1 time in total.

Manny, if she's not in too many pieces when you visit, photos would be great if possible. Thanks

Very kind of you - we'll wait with bated breath! Dad was telling me about the various work he did on her over the years so if there's any info you need give us a shout!