Geoff Richards took loads with his mega Canon but as he only has dial up internet it will have to wait till he posts me a CD. Tony will forward his to me via dropbox and Andre a professional snapper will have good ones as well. Be patient peeps.

And here is the Sabre overtaking a GT40 - or was it the other way round?

Btw, I was chatting to an aquaintance/colleague of yours whilst competing at Shelsley Walsh on Saturday. He wandered over and introduced himself having spotted my Sabre, and he was bowled over when I told him that you were competing at Spa last weekend. Trouble is, I've forgotten his name...

Neil's boss also went to Spa and was gobsmacked at coming up behind another Sabre Six on the motorway going down (me)!!.

I don't want to be picky, but why does the car have a Triumph badge on the steering wheel?
And how did I know?

And how did I know?

You must have hacked into my computer:- 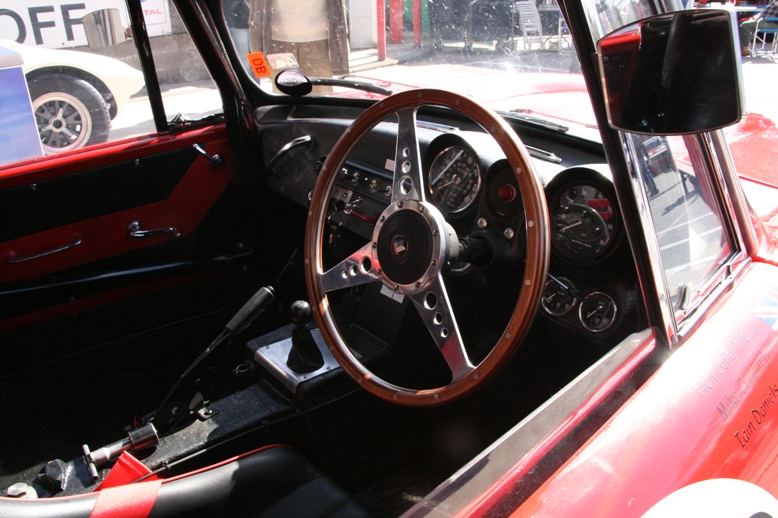 Firstly a big thank you to all who ventured across to Spa to support the Sabre, secondly I should apologise to anyone who may have been talking to me over the weekend who may have got a pre occupied or vacant response, I’m sure you can imagine the whole weekend proved to be a rollercoaster ride of emotions filled with excitement, frustration, apprehension, stress and tiredness, for the whole team, but boy what a buzz!

Having driven through the night we arrived early at the track (6:00am) on Thursday which set the scene for the weekend, already we were experiencing frustrations as the cohabiter of our allocated garage was already nestled in with a Ford Falcon so large that the garage allocated for two would only fit the one car, we had to settle for a gazebo behind the garage.

The hour and a half testing on Thursday proved to be the first challenge, four laps in the car developed a misfire then failure resulting in the car being stranded on the main strait for the whole session, on recovering it at the end, it was diagnosed to be the electronic ignition which had ironically been fitted specifically for the race (allowed in the regs) to aid reliability! For qualifying we were taking no chances and decided to remove the offending article and go back to the traditional set up.

Qualifying was also one and a half hours with myself Mike and Iain psyching ourselves up to deliver a reasonable time and grid position, alas this was not to be, again on the forth lap we had e repeat of testing with a misfire developing rapidly leaving the car once again stranded around the back of the track, Mike and Iain were eagerly off to the rescue only to be instructed by the marshals that assisting in the repairs outside of the pit lane jurisdiction would render the car disqualified, fortunately although not a master of electrics I am not a complete numpty and after instructions shouted at me from the other side of the fence and a long process of elimination we were able to get the car started and run long enough to get her back to the pits. Frantic replacement of components enabled my brother to get back out on the track to have his long awaited session cut short by the end of the qualifying only one lap later.

The cold harsh realisation that because each driver had not completed 3 laps each (normal in a lot of events) all the sweat and tears over the last two years could have been in vain as we could be awarded “Not qualified” for our efforts, we eagerly awaited the results sheet which seemed to be one of the longest hours my life.
On being handed the results sheet my veins filled with life as I read at the bottom minimum 3 laps per car, not driver! With 5 laps completed we were in! Admittedly we had not had chance to go for a quick lap but never the less we were in! Qualifying 98th out of massive 104 starters.

Just when we thought great we can have a couple of beers and relax until tomorrow the Ford Falcon occupying the garage decided to keep us all on their toes by engulfing the garage in flames, the ensuing release dry powder quickly got the situation under control only to leave the garage looking like a premature Christmas scene. Now I was glad we hadn’t been able to fit the Sabre in the garage!

Race day came and the routine final prep for the car was started, in addition we were waiting for replacement electrical parts which were very kindly brought over at last minute by Richard Wos, BIG thanks Richard!
The time had come, all ready to go the car was driven out to join the warm up lap and the grid formation in preparation for the rolling start, me first, Mike, then Iain was the order in hourly rotations. The race started well, passing four cars in the first couple of laps, then like déjà vu a misfire started to materialise sending a cold shiver down my spine, not again I thought, this time I managed to get her back to the pits to discover it was only a plug lead which had dislodged, reseating it we were off, full steam ahead!

The next two hours went by with only a few sideways moments, me, Mike, and then it was Iain’s turn with all three of us putting in respectable times all within a second of each other. Then as if we hadn’t had enough drama over the past couple of days disaster struck, a TVR spectacularly lost its wheel hurtling it across the track into the path of Iain who hit the offending article at high speed leaving a large hole in the side of the car, breaking the bonnet catches clean off and dislodging the distributor lead bringing the car to a halt, a less fortunate Jaguar E Type hit the wayward wheel totalling the front of their car. Iain managed to re start the Sabre and limp back to the pits where frantic “duck tape” repair work was undertaken, bruised but mechanically sound and having lost 25minutes we were out again.
The remaining two and a half hours went like clockwork with us willing the car all the way, the last lap seemed like it took hours but sure enough Iain bought the car home across the line to the delight of all!

Results can be found on http://www.roadbook.de then: Spa Six hours Endurance race- English (only option) (Not Spa Six Hours meeting) then go to Results - look for Race 1 Six Hours

All in all a pleasing result for the team and a fantastic experience, one I would recommend to anyone who gets the opportunity.

As to the eagle eye spotting the triumph steering wheel centre I have tracked the original to a previous owner (not Tony ) who wishes, I believe to retain it for sentimental reasons, so if anyone knows where I can obtain an original one then let me know.


Thanks again for all the support.

WICKED what more can i say, Great to see the Sabre 6 in such company and really holding its own. 'Well done to all'

Well done to the whole team, a great result, and many thanks for the write-up!

An incident packed occasion - glad you all survived (relatively!) unscathed! That TVR wheel could have had horrendous consequences....BRILLIANT RESULT & my thanks for posting the report........

Don't forget to send the write-up and photos to Terry for Slice!