Over the winter I did the usual thorough check of everything as our historic season was starting earlier in 2020 with the Ross Traders having moved to 1st February 2020
It was also an afternoon / evening event and as Carrie and I had never done anything in the Scimitar after dark, we entered Tavern Motor Club's New Year 12 car rally on Friday 10th January

During the day, I took the car for an MOT and the friendly tester adjusted all 4 headlights to the correct angle

The rally started and finished at Tavern's usual meeting place, the Royal British Legion in Dundry, and the route was 45 miles around the roads south of Bristol, including the maze of lanes around Nempnett Thrubwell. Marked maps were given out and we set off just after 8pm along with the other 9 competitors.

The organisers are both good Welsh Road Rally navigators and are used to the speed of the top Welsh competitors, so the route had a lot of short sections and marshals to slow everyone down.
As it turned out, it made it very difficult to keep on time and we were dropping a minute or 2 on most sections and were almost over the time limit by the halfway point. Luckily there was a time recovery section here, and the 2nd half had an extended time limit so we pushed on and got to the finish with a few minutes to spare.

At the finish, the results were going to take a while because everyone had dropped a lot of time, and there were a lot of controls to check, so we headed home.
The event had gone well for us, a couple of hesitations but no wrong turns and it highlighted that there was not enough lighting inside the car for Carrie to do anything apart from follow the map, so a bit of work to do before the Ross Traders.

The next morning, we received the results from the organisers and were surprised to be 1st Overall by a minute

We found out later that a lot of crews had dropped time on one section where the marshals was giving the time the cars should have arrived, not the time when the cars actually arrived!
Carrie spotted the wrong time while we were still in the control and got the marshal to change it, so we benefited from this!


Over the following few weeks, I fitted a Brantz Rally Timer - this has a clock and a stopwatch with nice bright red numbers, similar to the trip meter, as well as replacing the cigarette lighter with one that actually worked, adding a strip of LED lights stuck to the bottom of the dashboard above the glove box door, with a piece of card above it to stop any glare on the windscreen, and finally replaced the old Avanti map light with another LED light above the passenger door - this lights up the clipboard so the marshals can see where to sign, making their job easier and more importantly quicker! The central auxiliary switch panel had 2 more switches added and I have a spare feed for another light if required. 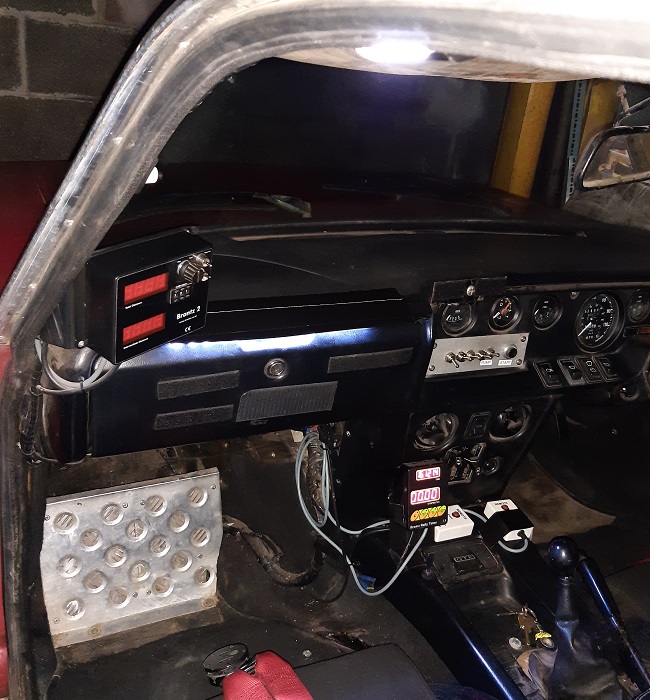 On the mechanical side, I just adjusted the rear brakes and tightened and greased the handbrake cables, so all ready for the Ross Traders

After a year off, the Ross Traders was back with a new organising team and a completely different format with 9 Tests and 2 Regularities inside Caerwent, and 3 Regularities on the public road.

Just over 40 cars had entered with Carrie and I at Car 7.
I've only been to Caerwent twice before, the last time being 10 years ago, and Carrie had never been so we were looking forward to an interesting day trying not to get lost...
And with the event starting at lunch time, the last third of the route was going to be in the dark!

Those of you who have not heard of Caerwent, it's a village in South East Wales which is home to a Military Training Area. Originally built in 1939 as a Royal Navy Propellant Factory manufacturing cordite and nitroglycerine, up until 20 years ago it was so secret it wasn't even marked on the local maps! It covers 1500 acres with a 7 mile perimeter road (similar size to a large airfield) and a maze of roads
linking over 400 buildings which were built for the original factory, then modified to become a US Military munitions dump in the 1980's.
There are 3 stage rallies which run there each year, and enough roads to do 12-15 miles without using the same section twice!

We started with a loop of 3 Tests, all 2-3 miles long, using reasonably detailed diagrams which showed the roads we were using but no buildings. Test 1 went well (5th quickest) but on Test 2 we went the wrong way at a T junction and nearly ended up back on Test 1 ! We managed to retrace our route and found Car 10 (an early Lotus Elite) coming out of the same T junction so we followed them to the end of the Test. The 3rd Test we started behind a Mk1 Escort with a slipping clutch - we nearly caught him after a mile but then he got going better and wasn't holding us up, so we continued behind as it was clear they knew where they were going better than we did

Next we did the first public road Regularity which started East of Chepstow and cut across to just North of Tintern Abbey. This went well although slightly out at the first 2 controls we were on 1s at the last one so happy with that. Back into Caerwent, we were surprised to be 7th at this stage, helped a lot by the organisers setting the maximum times for the Tests at 20 mph which meant that only 12 cars had beaten the maximum on Test 2 and our 3 minute wrong slot only cost us around 30s 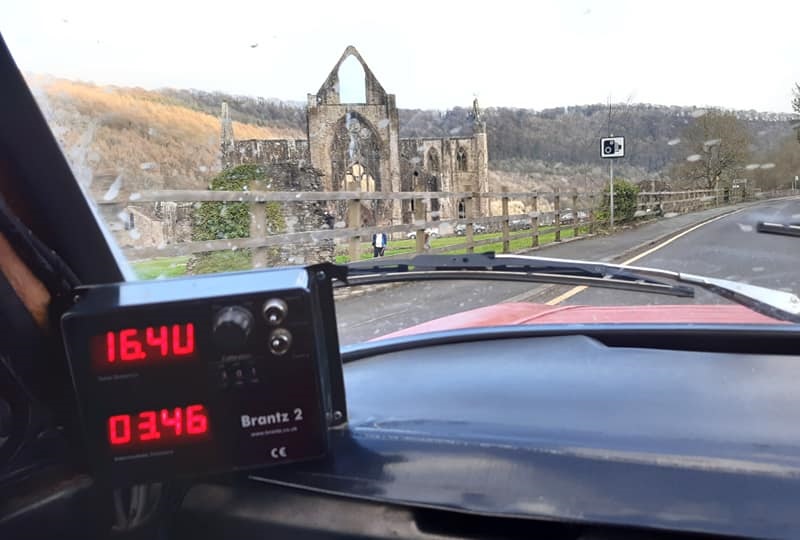 3 more Tests followed with slightly different layouts to the first ones. Test 4 we thought we'd gone the wrong way so lost a bit of time here, then on Test 5 I was getting the handbrake working well when I pulled it a bit too hard and there was a loud crack from the back end and I nearly slid into a kerb. After this the handbrake was non-existent, one of the rear brakes was binding and the brake pedal was getting closer to the floor so I backed off a bit. At the end of the Test there was nothing obviously wrong (no fluid leaks, etc) so we continued sensibly, but still setting top 10 times.
Before the afternoon halt, we had a Regularity in Caerwent which was plot and bash - Carrie was given a map of Caerwent with some buildings highlighted with numbers on and a list of the order which to pass them. This was straightforward although I couldn't drive fast enough to maintain the 30mph average, but after 2 controls we were on the perimeter track at a slower speed so this was fine, almost keeping up with the top crews.
At the afternoon halt we were still 7th and I checked the Scimitar over as well as I could, adjusting the rear brakes but finding one side would not adjust up so maybe the adjuster had broken. The clutch pedal was also on the floor but I wasn't sure I could adjust that in the time I had, and the clutch wasn't slipping, so I left it alone in the hope it wouldn't get any worse! 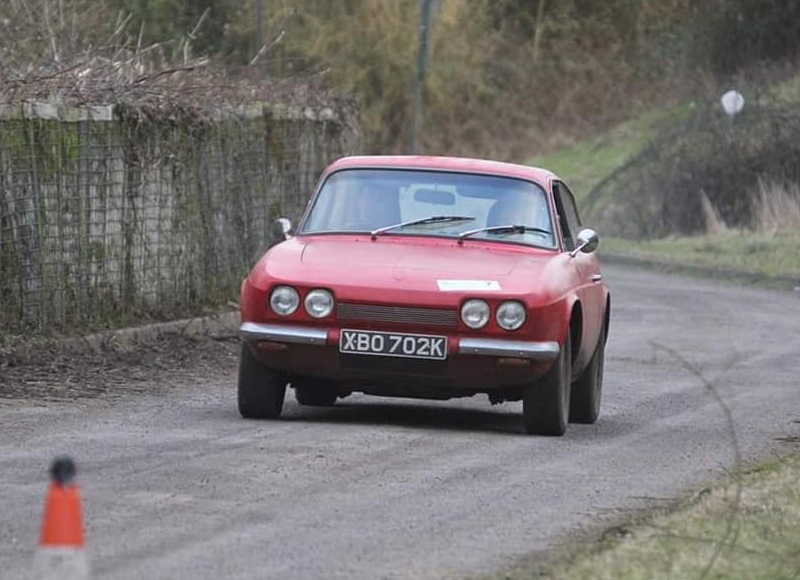 As darkness fell, we got ready for the next 3 Tests, Test 7 was similar to a previous Test, but Test 8 joined 2 together making over 5 miles and Test 9 was just a bit shorter. They went ok - I turned up a dead end which looked like it went somewhere so had to back out, the brake pedal was getting closer to the floor and becoming less effective, and I was having trouble changing gear, sometimes needing to press the clutch again when in neutral to get the next gear, and when the rear brakes are failing, changing gear helps a lot! I thought briefly about heading home but knew it would be easier once we were out of Caerwent so we carried on.
The last bit in Caerwent was another Plot and Bash Regularity, this time starting on the perimeter track where I drove for 2.5 miles while Carrie plotted tulips onto a map which was printed on the back of the tulips, not an easy task, but she had it done before I'd got to the 2.5 mile mark. The organisers had found some gravel tracks to link the perimeter track to the main area, through the quarry and back up another one, we missed one turning but realised quite quickly, only to miss it again on the way back

Finally we finished this section and headed out through Chepstow to the final 2 Regularities to take us to the finish at Ross on Wye.

The first one we had plotted in the morning and it seemed fine, but we missed a loop in the middle and picked up a 5 minute penalty.
The last one was plot and bash using grid references and Carrie got these down quickly but was unsure about 2 of them. We got to the first control slightly late, then I pulled over after the control to have a quick look - one was near the A40 dual carriageway and I remembered a triangle on a junction we'd used before and the other was on a smaller road where there's an unmarked layby, so we carried on quickly. Right at the end we missed the last turning - we both saw it but decided that it wasn't the one we needed, only to come back later, so this cost us another minute.

We had a quick meal at the finish and headed home as we expected the results would take a while with a lot of crews missing loops and having other queries to sort out!
But after all the issues, we were pleased to finish 6th overall and 2nd in class, not far behind 5th but over 7 minutes behind 4th

All in all it was an enjoyable day, and credit to Ross Motorsports Club for putting on a challenging event

Well done both - sounds like it was pretty challenging!

My next event is a Historic Tour in April, but I thought it was time I had a quick look to see what had gone wrong on the Ross Traders

The clutch I have just adjusted the pushrod and it seems fine now - I was glad I didn't attempt this on the event as the pushrod was so tight in the clevis so I had to unbolt the clutch cylinder and remove it into the engine bay to loosen this. Once loose, it adjusted easily and now the pedal engagement is back where it should be

Then I dismantled the drivers rear brakes, the side I couldn't adjust on the event, and found that the thread had gone in the adjuster (this failing must have been the loud noise we heard), hence the long pedal travel and non-existent handbrake. Everything else looks fine, no fluid loss from the wheel cylinder so I've ordered a pair of new adjusters and will change the other side too. The adjusters are the only thing in the brake system which I didn't replace when I first built the car, but I'm still surprised it failed so suddenly!