This is the car I bought off eBay in October, she's been off the road since 1993 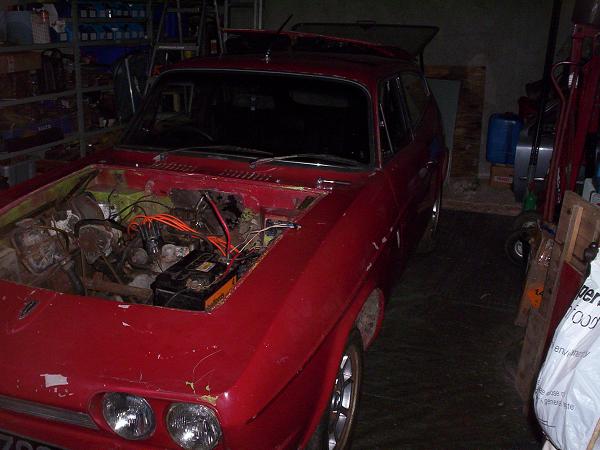 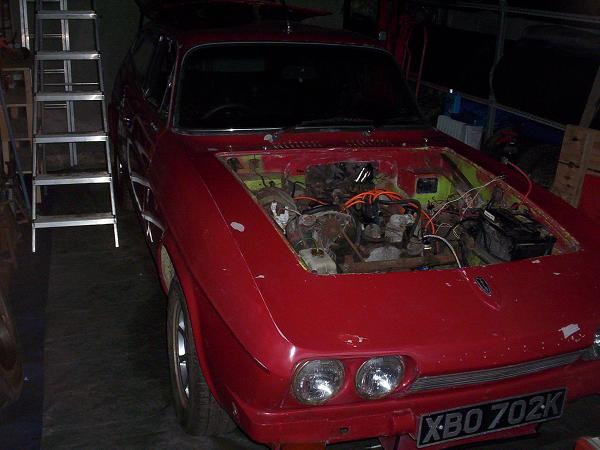 Inside the interior light was on along with the ignition light, before I put the keys in, and it went out when I turned the key

None of the switches did anything, but when I turned the key further the engine cranked over slowly

I knew it wasn't seized as the previous owner had regularly turned it over manually, but I was still surprised

So Friday night I thought I'd see if I could get a spark, wired up a couple of switches in the engine bay, one from the battery to the coil and the other to the starter solenoid
The coil looked a bit old and the terminals were corroded so I swapped this for a spare one I had, cleaned up the plugs, attached all the leads except for one to a spare plug
Cranked her over, but no spark...

Next I had a look in the distributor, everything looked in good condition but when the points were closed it wasn't completing the circuit
I removed the points and found the contact faces were corroded, but after a clean with some emery paper they were shiny again
Back together and now we had a spark

Saturday morning I bought a fresh can of petrol which I rigged up in the engine bay with a hose from it into the fuel pump - the fuel pipe to the pump was perished and the petrol tank smelt more like paint thinners than petrol. I also took along a second battery and connected this between the first battery and the starter solenoid, so now I had 24v to the starter and 12v to the coil. This time she cranked over nice and fast but there were no signs of life and after a few attempts the starter began to smoke so I left it to cool down for a bit

I then checked if there was fuel getting to the carb by removing the fuel pipe and found it was dry so I assume the diaphragm has gone in the pump. I also cleaned out the mesh filter in the carb which was full of bits of something that might have been a cork gasket once. Not to be put off by a lack of fuel pump, I set up a broom handle, a short length of hose and an old brake reservoir to gravity feed fuel into the carb and also an ice cream tub of fuel to keep it topped up (don't try this at home 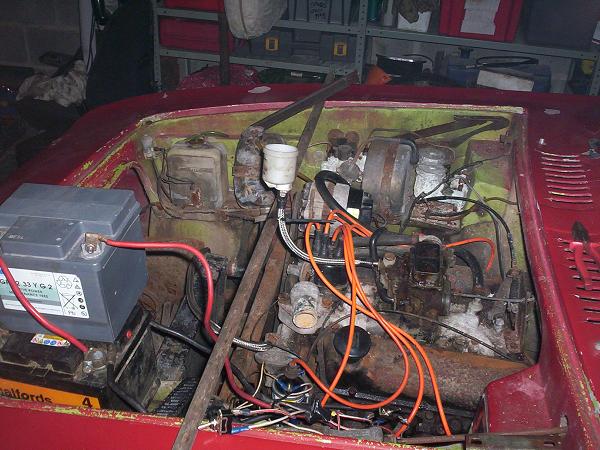 Cranked her over and this time she fired

and soon settled into a smooth fast idle. Clouds of smoke out the back but all sounded great. Between topping up the fuel I had time to check inside at the oil pressure gauge which was showing 50psi

I kept her running for about 5 minutes - as there was no water circulating I didn't want to run her for too long
I love old cars, they're so simple to work on

So now I knew the engine was ok, today I started the strip down, removing everything in the engine bay - master cylinders, servo, radiator, washer bottle, wiper motor and linkage, fuse box, alternator, lights and indicators, and pulled all the wiring back to where it goes through to the wheel arch, labelling everything as I went

It all came apart pretty well except for the master cylinders that needed chiseling from the bulkhead, one of the lugs snapped off the clutch one it was stuck so hard, but these will be replaced with new ones anyway. There was a lot of fibreglass missing from below the lights and the front valence / air intake has been replaced with ally sheet at some point 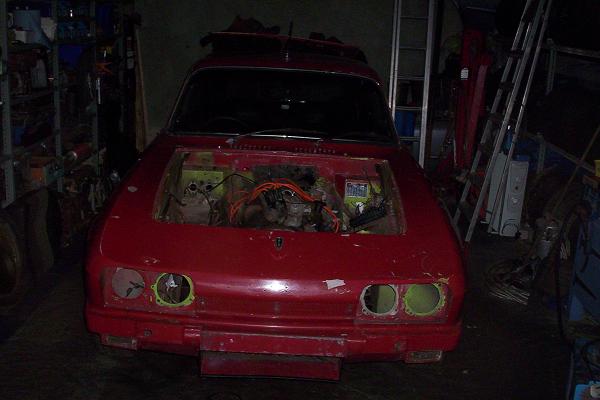 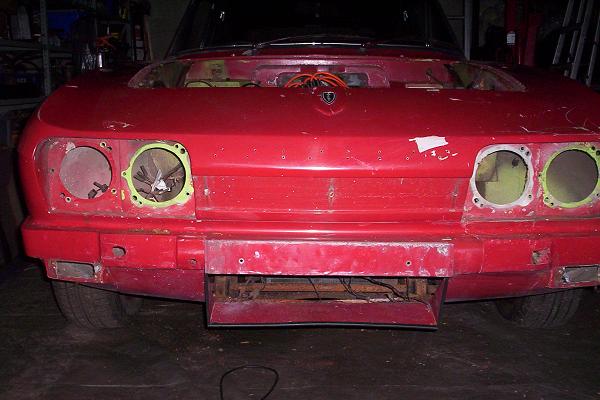 Cracks around the battery tray and body mount 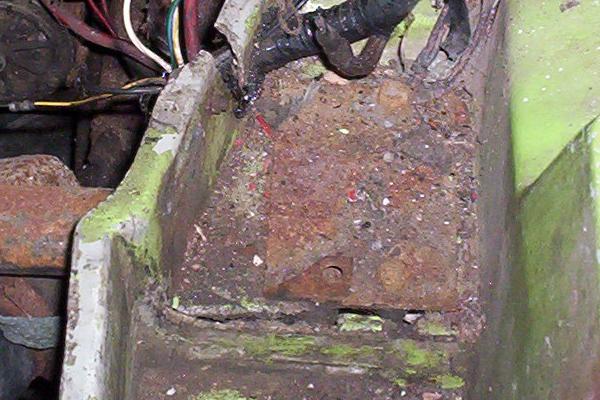 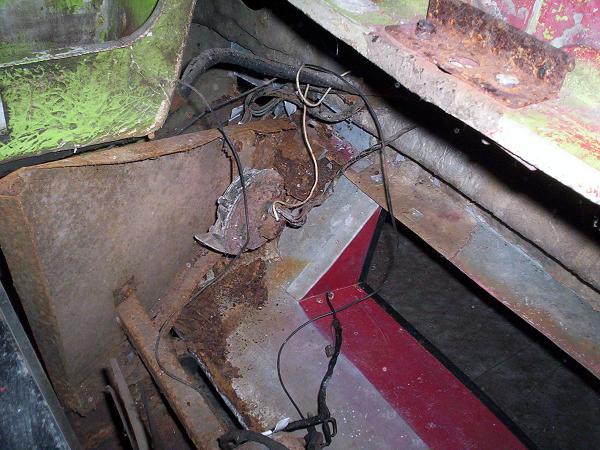 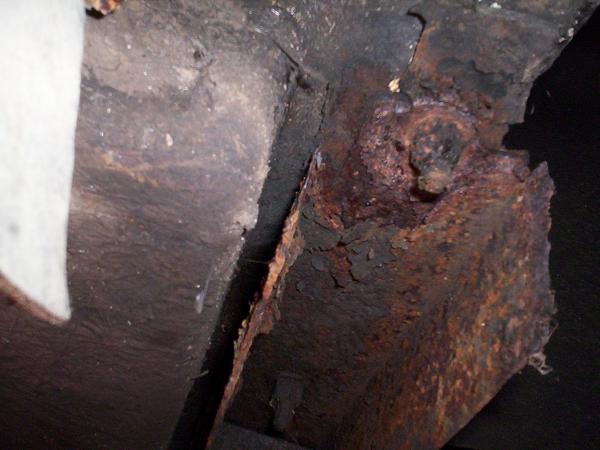 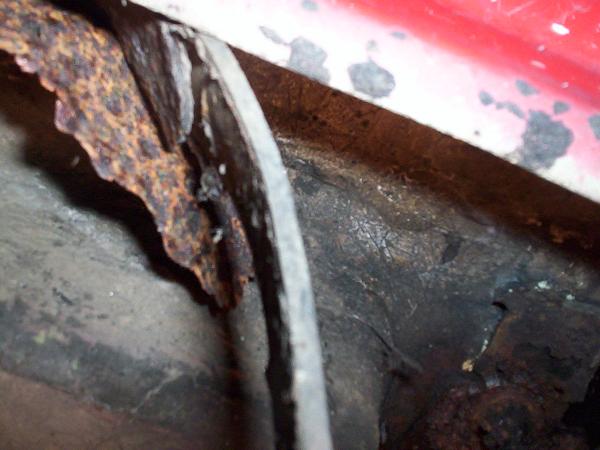 Some of the electrical problems due to a non-existent earth! 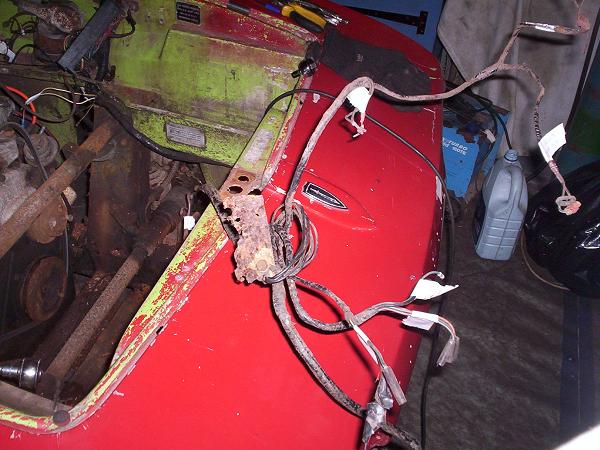 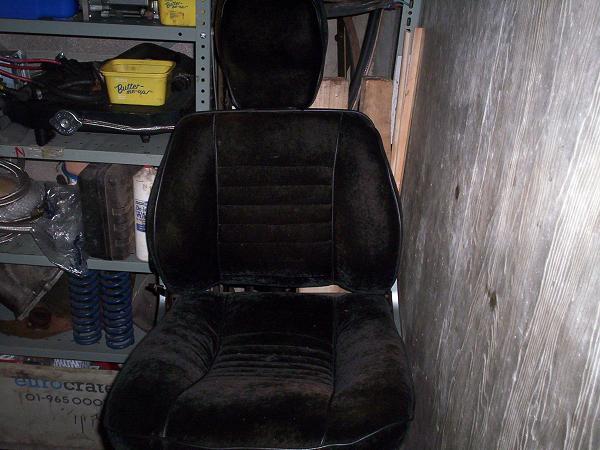 The subframes are too wide for the holes in the floor, so they were bolted straight through the fibreglass floor in 3 places (not 4) without any reinforcement
Not sure how she ever had an MOT like this, but they won't be going back in - the front of them is too high and gives an odd driving position where my knees hit the steering wheel

Continued the strip down over the last few days 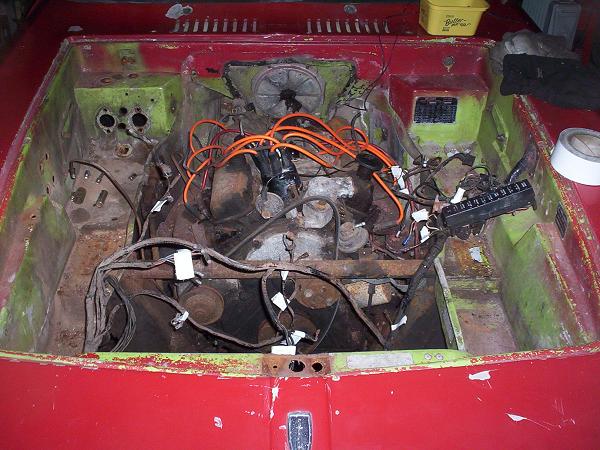 Passenger door removed, needs a bit of work after 6 out of the 8 hinge bolts snapped, I had to drill out a couple of interior door handle screws and the trim panel cardboard backing fell apart in my hands

And most of the carpet peeled back to get at the body bolts. The gear stick hole has been hacked about as well and is far too big now 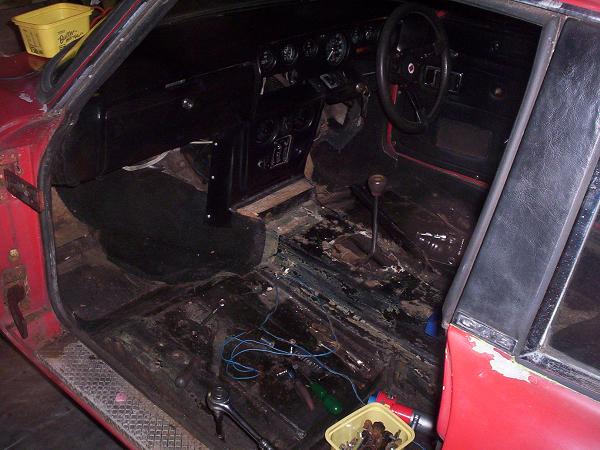 Had a look at the front brakes, calipers are stuck solid but discs and pads must have been renewed just before she was laid up 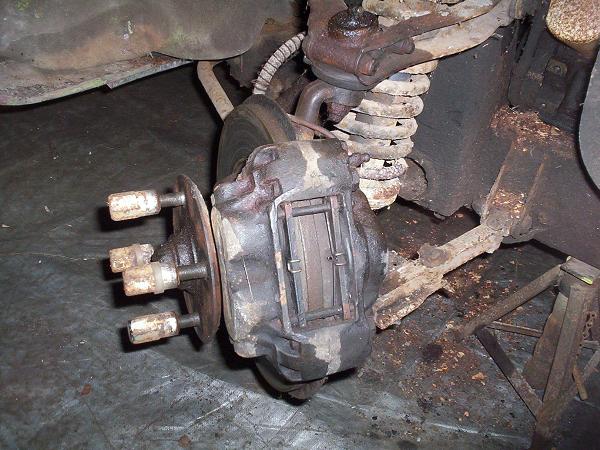 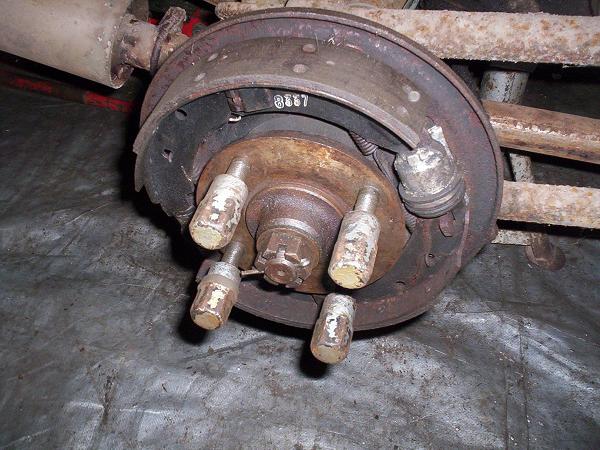 By the end of today I'd removed 23 of the 30 body to chassis bolts, some snapped off, some ripped the floor to pieces and some came out cleanly.
The seat belt mounting bolts look to have been replaced at some point, the mount on the tunnel had the reinforcement bracket underneath one side, and on top the other side

But the body roll bar doesn't look at bad as some I've seen on here, so it's going well at the moment

I've got a few days off work now, so hopefully the body will be off this week

hacked gearstick hole normally indicates a gearbox type change (auto to manual) - but your clutch master cylinder hole looks to be original? it looks like an early box, so not there to replace the inhibit switch - possibly a poor method of repairing the linkage?

It's not quite as round as even Reliant made them...

difficult to tell from that picture - Gavin should be able to confirm though.

GavinR wrote:The seat belt mounting bolts look to have been replaced at some point, the mount on the tunnel had the reinforcement bracket underneath one side, and on top the other side

I'm not as familiar with 5s as I am with 6s but that rings a bell - I think it may be the normal situation?

GavinR wrote:The seat belt mounting bolts look to have been replaced at some point, the mount on the tunnel had the reinforcement bracket underneath one side, and on top the other side

I'm not as familiar with 5s as I am with 6s but that rings a bell - I think it may be the normal situation?

It's not quite as round as even Reliant made them...

I think you could be right, it might be an auto changed to a manual

Close up of bulkhead, clutch cylinder hole is definitely different to the brake one, and 2 of the 3 pedal box mounting holes are a lot bigger than they should be
The pedal box was a pain to remove having a 4th nut and bolt through the bulkhead holding a very dodgy looking lower steering column bracket to the pedal box 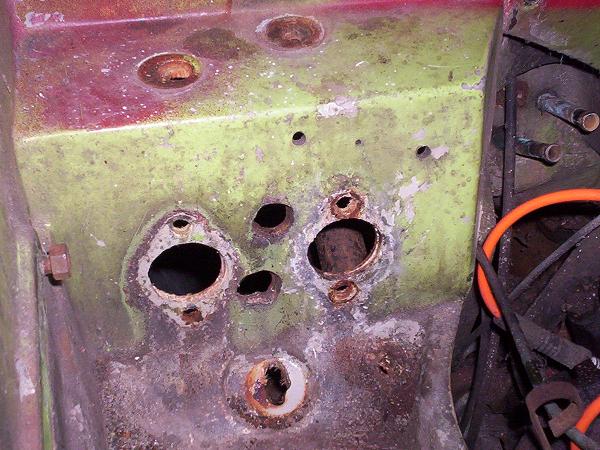 Close up of the gearstick surround, not sure whether to try and make it smaller again or just clean up the edges, could be useful for access to the linkage 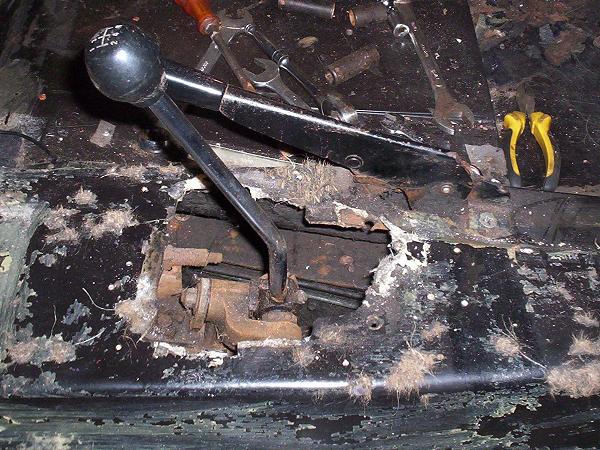 Finished clearing the interior and removed the side windows, tailgate, rear lights and pulled all the wiring out from the rear body
I also removed 40 bags of "loft insulation" from the side panels, obviously put there to keep the rear passengers warm 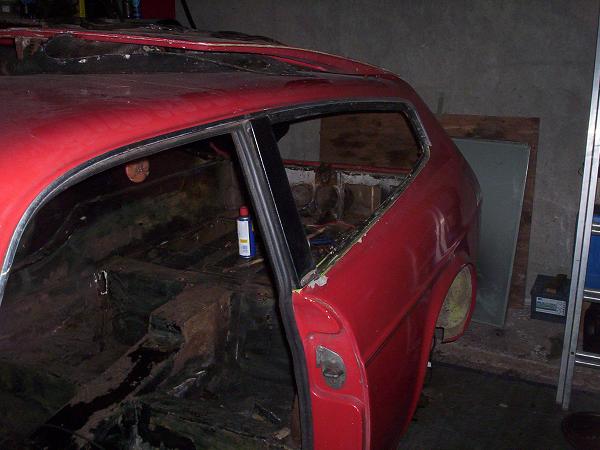 Got the drivers door off after a struggle, all the top hinge bolts snapped nicely but the bottom ones were so corroded I couldn't get a socket to grip well enough so had to drill them out in the end. Also collected various blocks of wood to help with the body removal 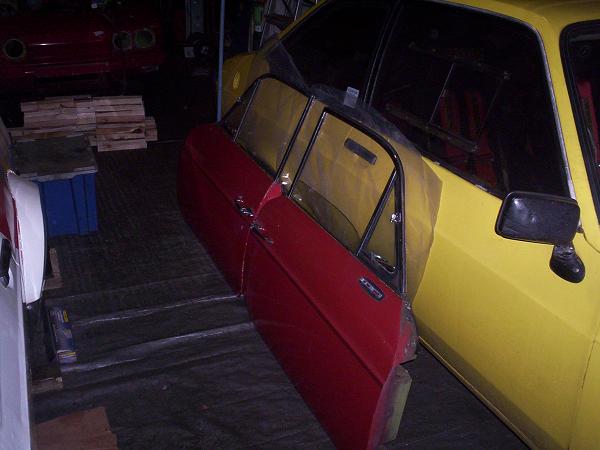 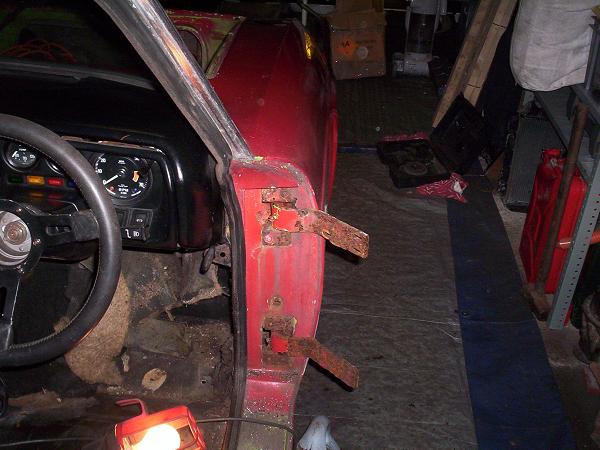 I also removed 40 bags of "loft insulation" from the side panels, obviously put there to keep the rear passengers warm

AFAIK There isn't a bracket between the lower steering column and pedal box, the column is just glassed in, so it sounds like someone's been tinkering

The bags of loft insulation are standard equipment on Scimitars!

I'd say it's well worth overhauling the heater while the interior is in that state - you don't want to do it later...

More progress yesterday, removed the instruments, steering column and then the windscreen after carefully cutting through the rubber round the top and the sides - it's a laminated top tint one so I didn't want to risk breaking it
Onto the dashboard, out of the 6 bolts, 3 came out well, one snapped off and the other 2 came loose before the captive nuts started spinning. After getting into some awkward positions I discovered that a 1/4" Whitworth spanner fitted the captive nuts perfectly and they came out

The handbrake cables were disconnected at the rear drums as it looked awkward to remove at the other end, then I removed the heater and vents 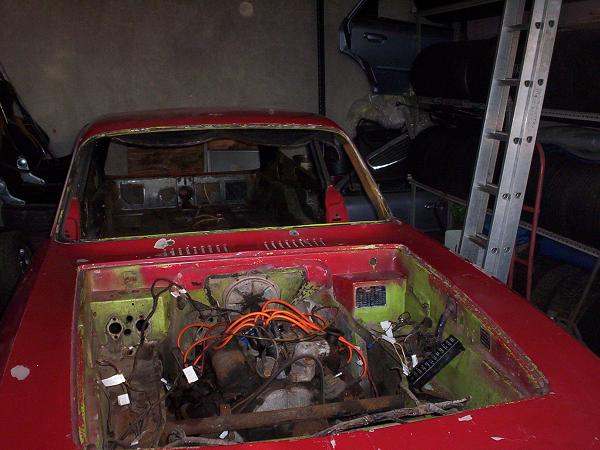 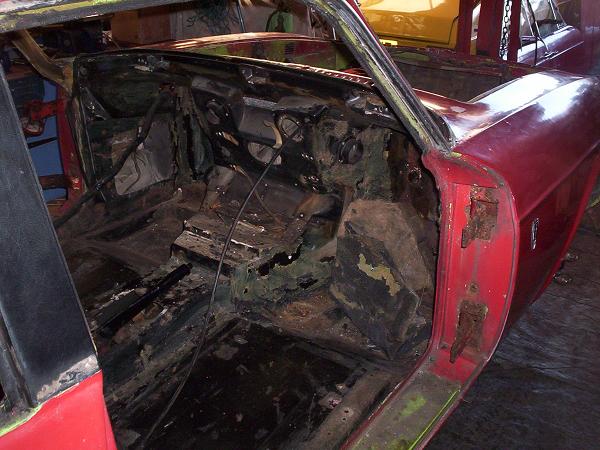 With the heater out I doused the heater valve with oil and left it overnight. Today I managed to get the shaft moving and dismantled it to get a better idea of how it worked. All looks good, so should work when its back together. I'll get the matrix pressure tested while everything is apart 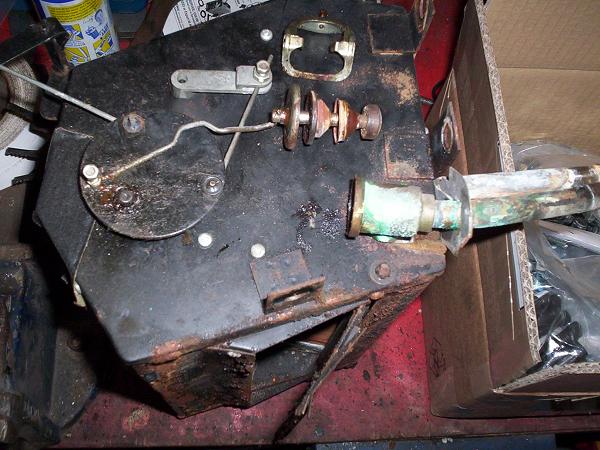 Then it was time to remove the body, engine crane attached to a piece of 3 x 2 to lift up the front 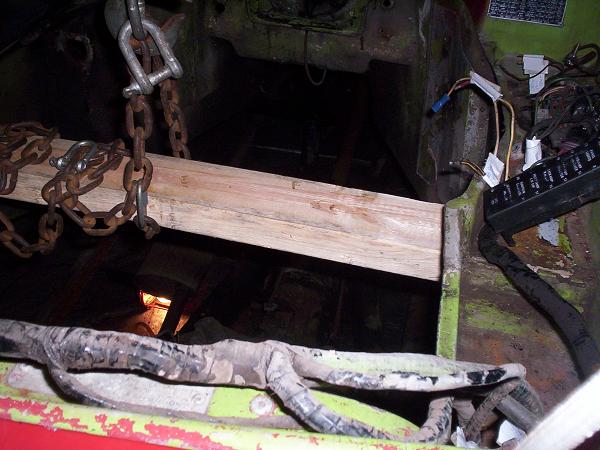 Front well up in the air, dropped the chassis back on its wheels to get more of an angle 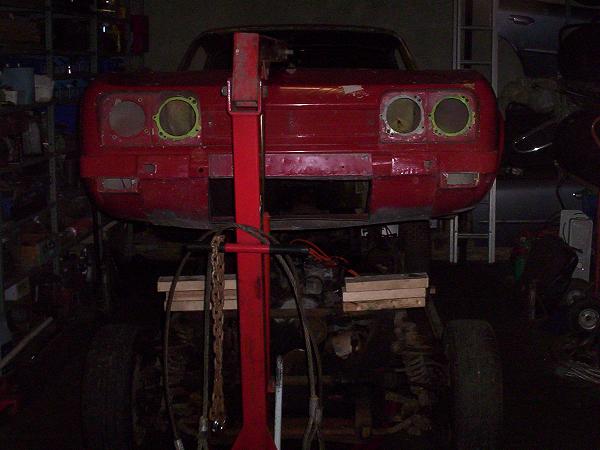 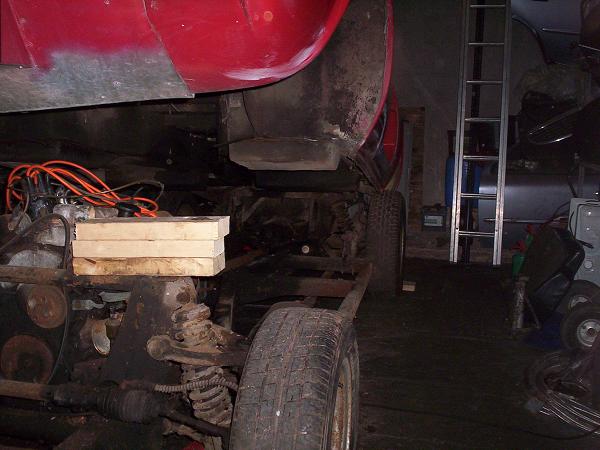 I now understand why the manual said to remove the fuel tank before the body, but after a bit of pushing and shoving the back of the body cleared it and it is now high enough to roll the chassis out once I've figured out how to support the front without the engine crane being there

Gavin,
Looking good so far but the hard part is about to start (ie. Paint stripdown/Reglassing Repairs/sourcing the myriad of new and Used bits required/Etc.../Etc... Anyhow Best of Luck and will watch with interest the ongoing rebuild resulting in yet another good quality scimmy back on the road !!! ;~}
Regards,
Viv

GavinR
your avatar pic (and forum name) looks awfully familiar, have you not campaigned a Mk2 Escort at Loton Park regularly? and a stage Mk2 also?
im a loton local & competitor (although frustrated on the sidelines for last 12 months or so) sure ive seen the car on the lockstops out of Triangle and Fallow on occasion

I'm a newby so i'm certainly no expert but was interested to read your story so far. I've recently got my first SE5a and had similar problems to you in getting it started, I also had the points problem and no fuel getting through and cured mine by giving the fuel line a quick burst with an airline which cleared things out and after a bit of damp start, cleaning the points and repairing the cable to the coil it started! It sounds like you're going far deeper than me to get your car going, will be interested to see how it goes!
Ron