I thought it was about time I put a few pics up about what I've been up to.

I bought the car over 2 years ago, and a house purchase shortly after meant litlte time to play with it.

However I got a few jobs done, and I'm back now working on it with a renewed enthusiasm. It's probably fair to say that I'm not aiming for a concourse winning car here, but something which is reliable, and tastefully modified where appropriate.

I'm trying to recall this all from memory, so the timeline is probably a little screwed up, and probably missing some detail, but hopefully it'll become like a restoration blog thing

Anyway, - quick pic of it when I bought it - The first job was to cure the leaky rear screen, which was caused by the drain holes in the channel at the bottom of the screen having rotted away. Quality repair this, courtesy of half a Bic biro barrel, and some p38

. Unfortunately I don't have a pic of the biro in place, but I also repaired the drain holes like so - 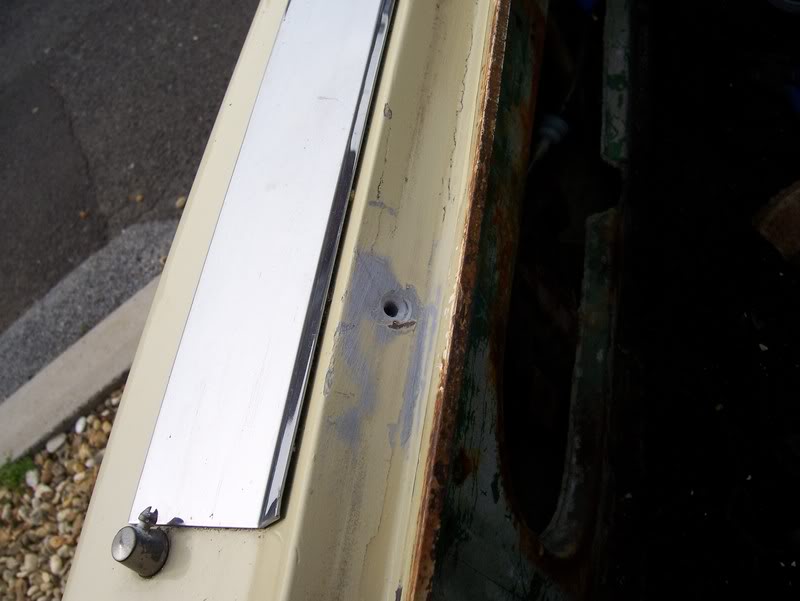 I also knocked up a couple of internal covers for the rear lights, although i think they look crap now in these pics, so I'll redo them at some point. (The main reason for doing it was because the wiper motor was hanging off! So I didn't do anything else for a while now, and we bought the new house which took 6 months to complete renovations - so the car took a back seat for a while. However, to reward it for being patient, this is where it lives now - 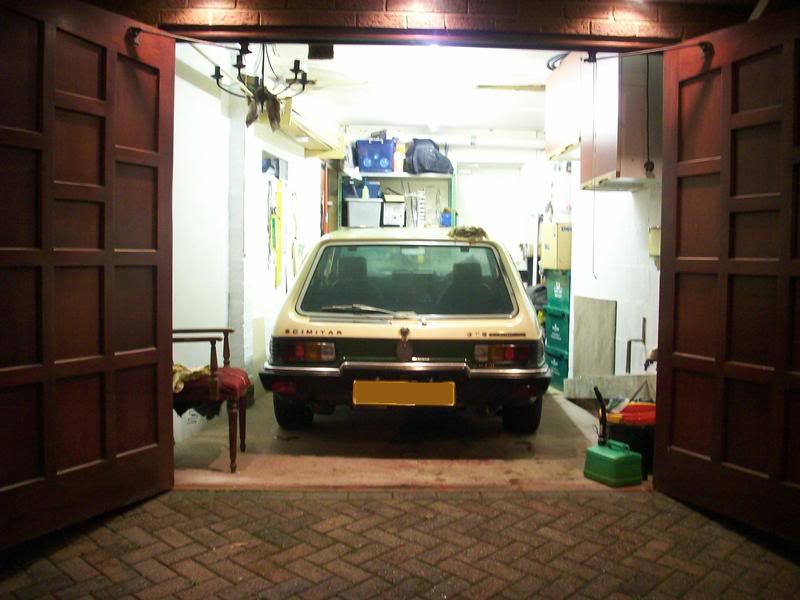 Earlier in the year I started to get it ready for MOT, so had a good crawl round it, and painted the front suspension and chassis. Heres a pic half way through -

I also decided to service the cooling system, so a new water pump was fitted which you can just see in the pic above, the old metal pipes were serviceable, and I had the rad re-cored. I also fitted a fan from a Rover Coupe turbo which just fits in without removing the original mounting bar for the original fans, as below with a couple of diy brackets 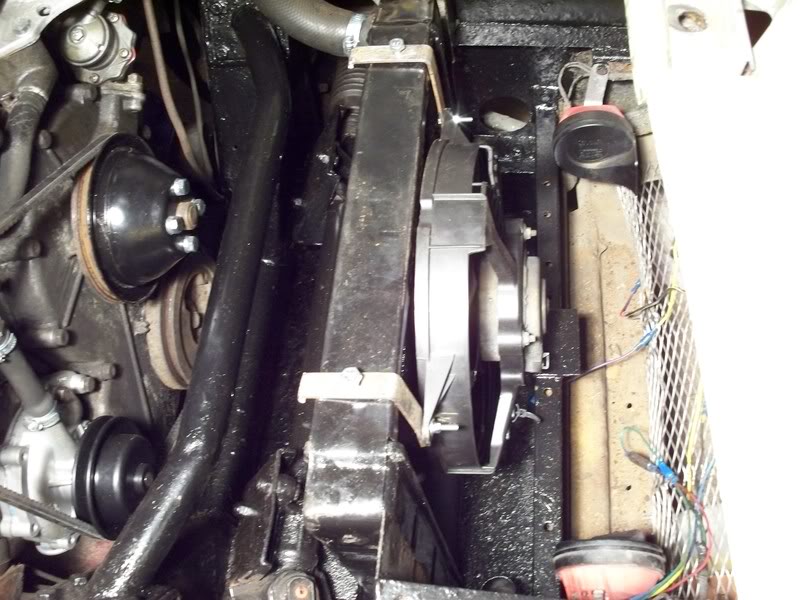 I also removed the rocker covers to replace the gaskets to cure an oil leak. While they were off I thought a coat of paint wouldnt go a miss - before and after :- 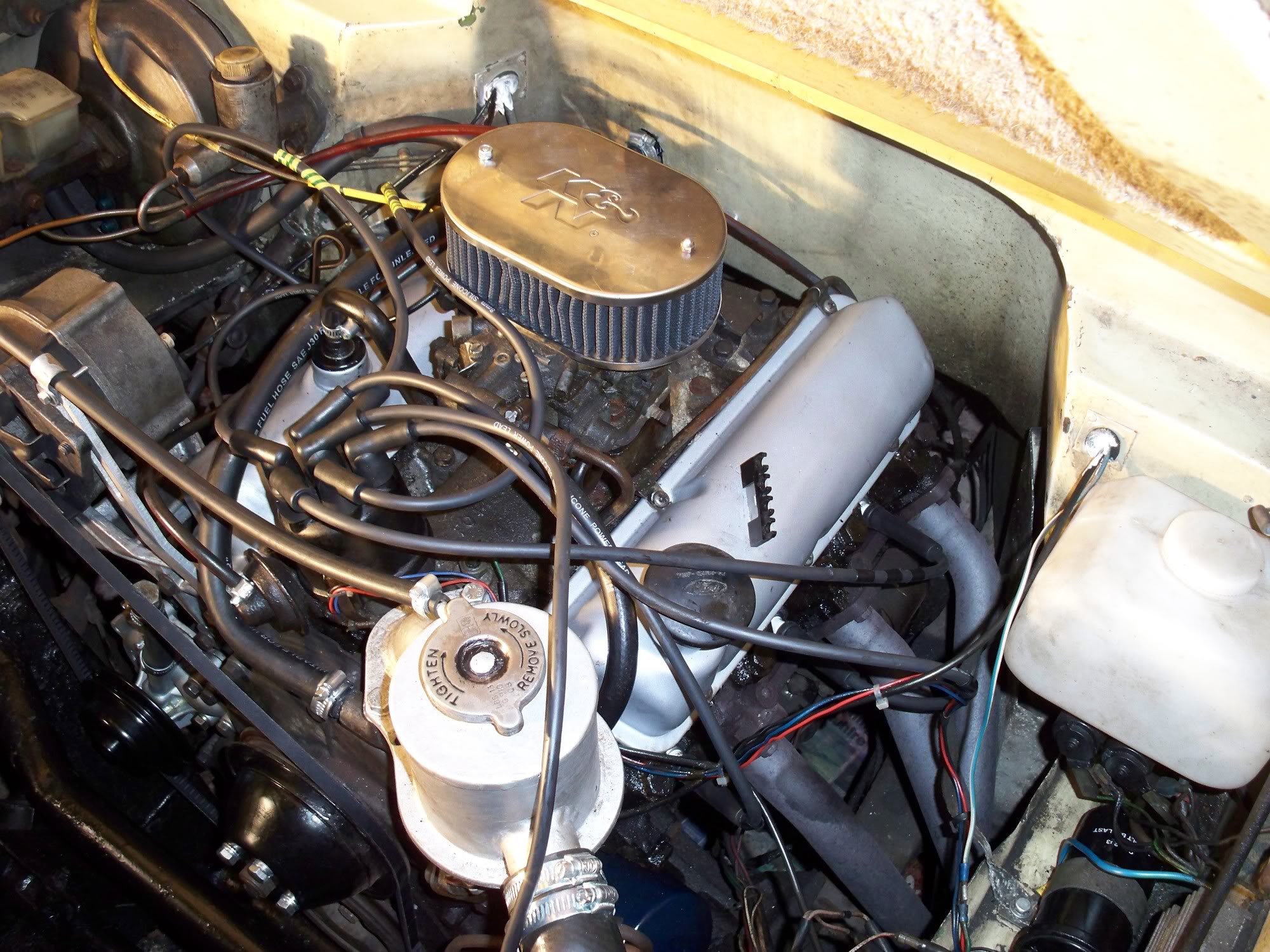 (excuse the messy wiring, I was trying to get it running after what turned out to be me unknowingly clouting the dizzy with the spare wheel!)

I also changed the plugs, leads, rotor arm, dizzy cap and cleaned the air filter at this point

It was at this point that a mate pointed out a slight leak on the master cylinder, so I removed it, rebuilt it (or so I thought) and bled the brakes. While bleeding the brakes I noticed a bit of rot on the training arm / axle brackets. This has turned into a mammoth job (well, it is by my standards).

Heres a pic of the worst of the rot - 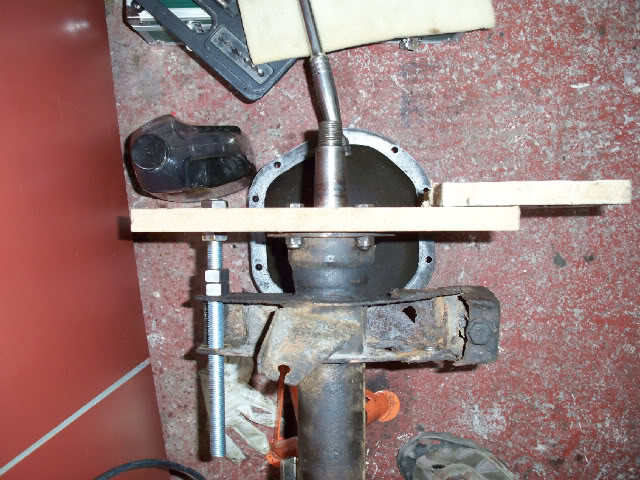 And thats where I'm up to now. I'm currently replacing all the trailing arm bushes for poly ones (the old ones were totally wrecked!). I'e also got to change the pinion oil seal - got knows why that nut is so tight! And I suspect I may end up having to change the oil seal at the hubs once the welder has done his thing

Oh, I also made an electrolysis tank for getting rusty parts freshened up - like so - Still to do -
- Weld, Paint, Refit axle, paint and waxoil the underside everywhere
- Refit diff casing with new gasket
- sort out a new master cylinder, and rebuild brakes
- replace handbrake cable with one I picked up from Curbs
- Clean stainless petrol tank, as it's 'grubby' at the moment
- Change the otter switch as I'm not completely confident that it will stay put in the rad once pressure has built up

I'll try and put some more info up when I remember other little jobs that I've done. I seem to have a load of photos missing for some reason, which are good for jogging the memory.

There was some recent discussion on the otter switches and good that you spotted the axle issue before it bit you back on a roundabout somewhere...

Looking good on the Middlebridge alloys

The car looks very nice Mike, keep up the good work and you will be able to come to Curbs in it next year

Hi Phil - it was that discussion which reminded me of how poor a fit mine was. I bit the bullet and bought a new one (even though I only needed the rubber seal really. I'll come up with some way of securing it to the end tank when I can get the front wheel off

I've actually refurbed the wheels now in Aluminium Silver. Also the centers had a sort of plastic sticker on which I removed to reveal a nice shiny chromed finish, so they should all look a bit fresher when they're back on. Here's a pic before looking a little grotty - 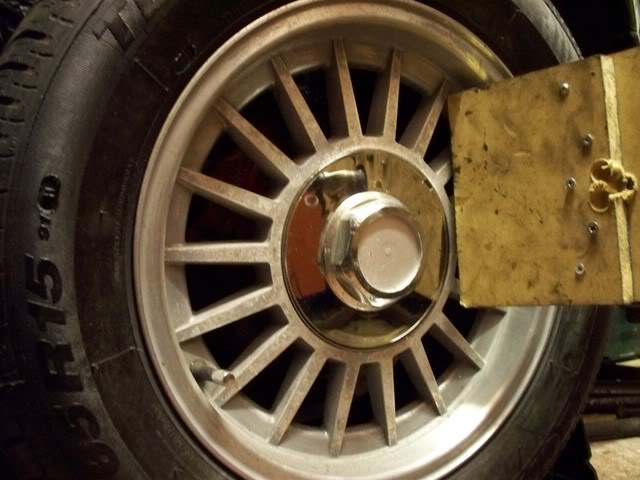 and heres one after - 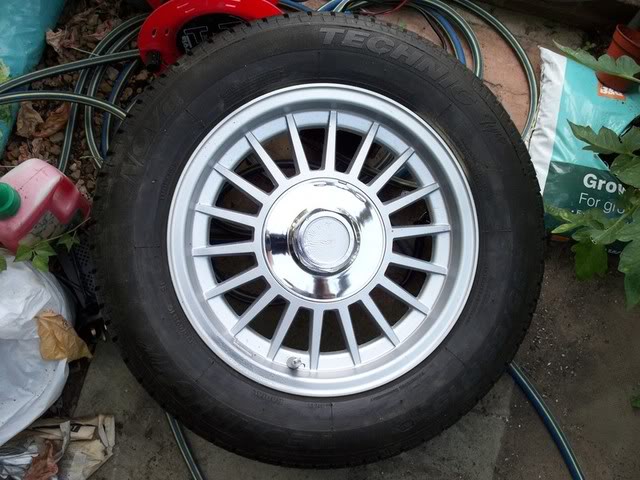 (Sorry if these pics come p big - I've resized them in Photobucket but they look massive on the preview.)

Cheers Bob, the plan was to be at Curborough this year in it, but as these things often do, it's took longer than expected. But ill definitely be there in it next year.

A quick pic of the radius arms after a day in the rust tank and 5 minutes with a flap wheel in a drill. I can't recommend this highly enough 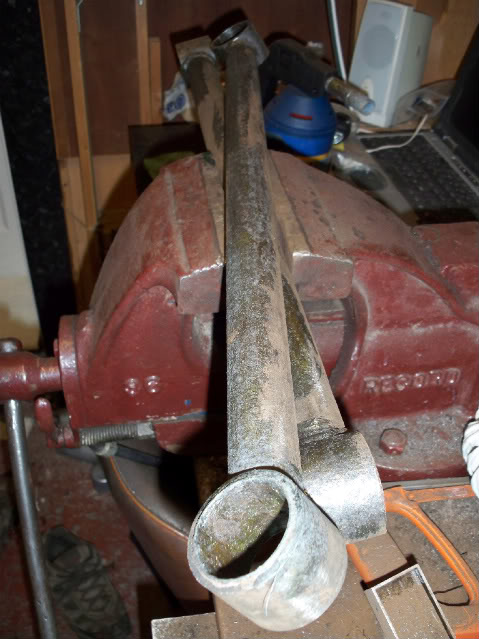 I look forward to watching your project updates Mike and I am sure now you have the Scimitar bug Curbs wont be a problem for you. The electrolysis tank is interesting I wouldnt mind seeing before and after pics of anything you put in it. GW and QRG do some very nice centre badges for the Middlebridge wheels, one is like a foil sticker but the other one QRG I think is much better quality and also a tad more expensive.

Cheers for the comments all, i'll pick up a few wheel centers on my next order, as they do look 'unfinished'.

Anyway, a few minor updates - not really achieved much tbh, but there you go.

Here's a pic of the trailing arm before rust treatment - note the knackered bush, this was actually one of the better ones! 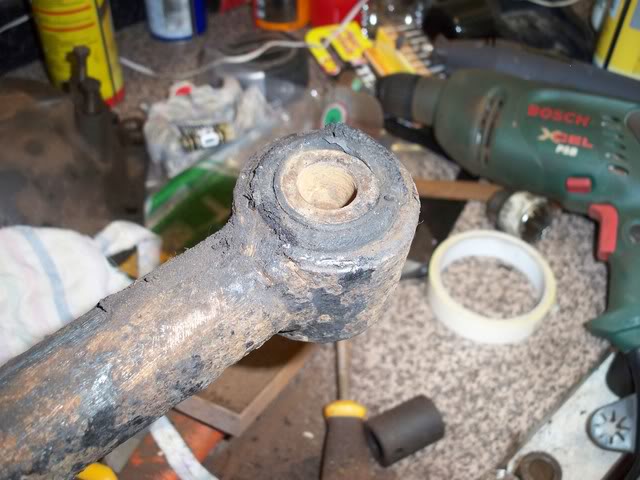 And here's one after its been in the tank and 5 mins with the wire brush - I'll probably give them another dunk before painting, as there's still a bit of surface rust - but it's perfectly paintable as is tbh. 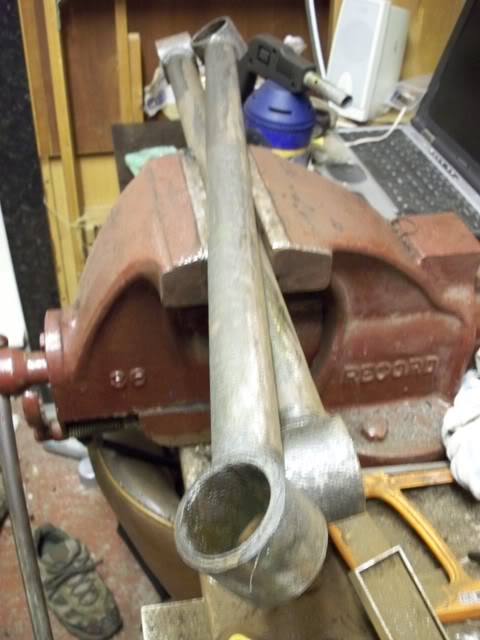 I then had a quick look at the rear brake drums, and went from this - 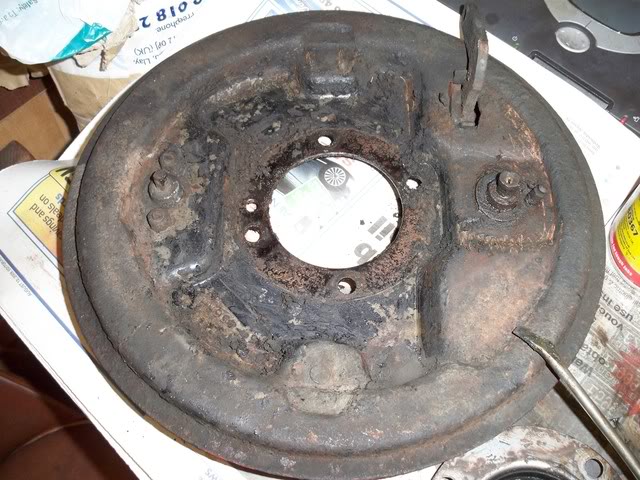 To this, ready for further dismantling and painting 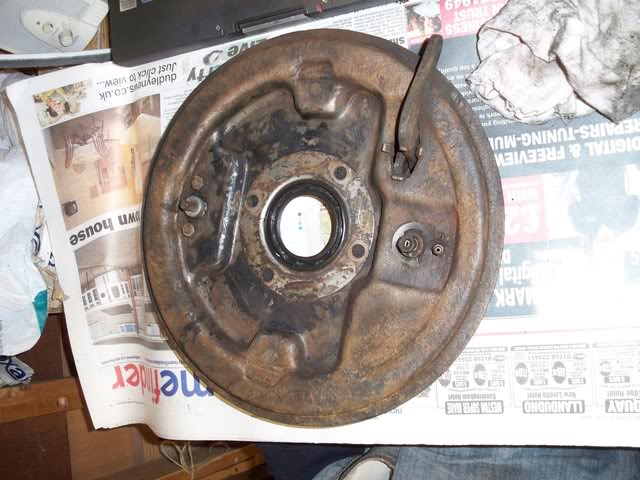 Rear shocks have come up quite nice too - 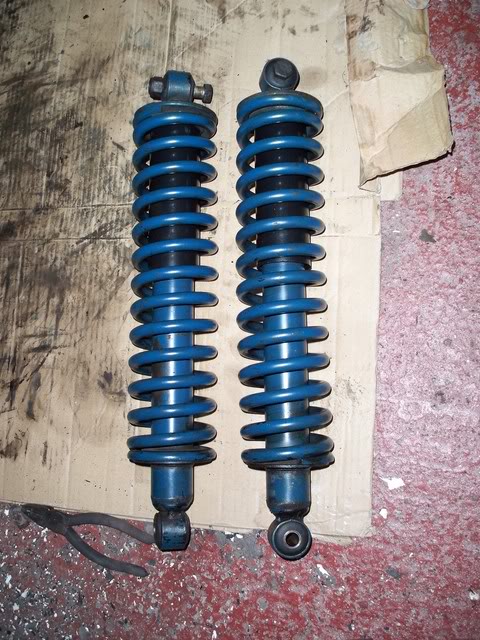 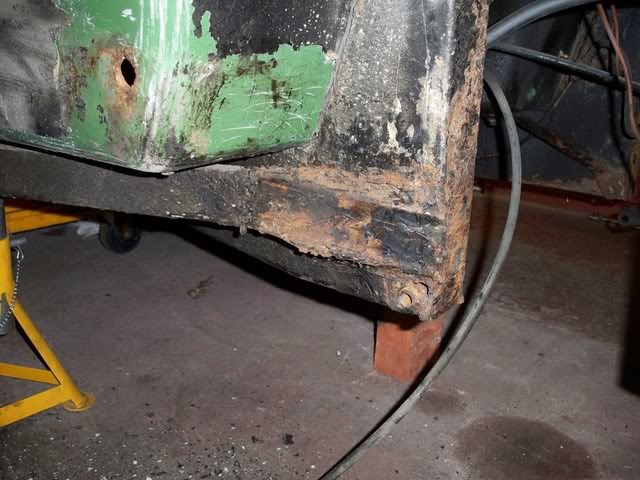 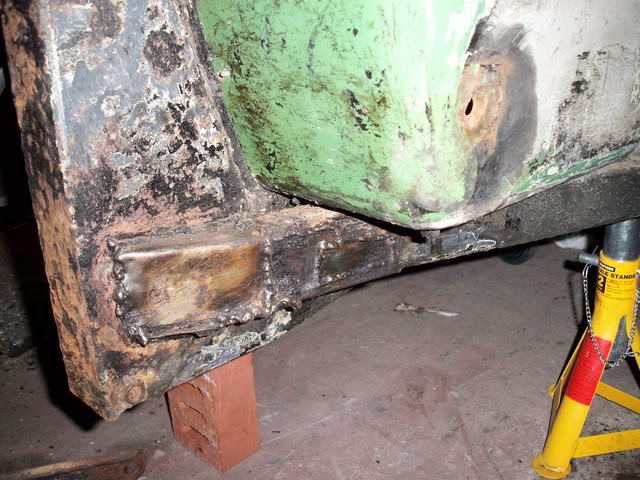 New wheel cylinders required here after I had to use the heat gun on the axle. (OK, I could've remove them first, but I'd struggled all morning and patience was wearing thin 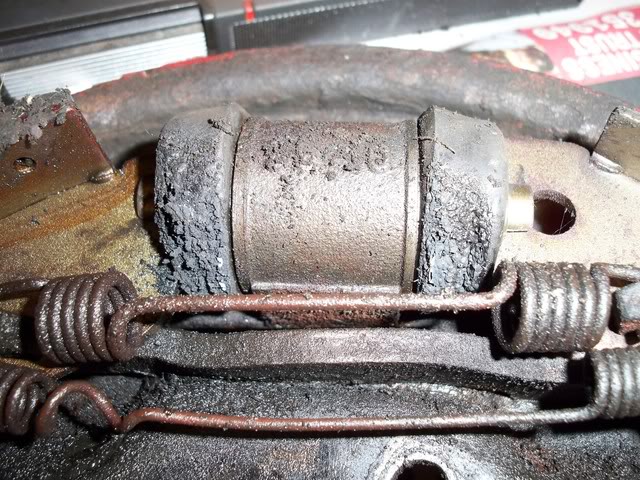 I refitted the axle back cover too, but only temporarily so I don't get muck in it with welding. I've bought a new gasket for it so as to cure that leak - do I need some blue hylomar or anything on it, or just the gasket on its own? (the pics are pretty poor of the axle for some reason - but there's not much to see there, honest

Hi Mike I am interested in what is needed to make an electrolysis tank, as it is something I think would come in very handy for me as shot blasting does not always leave a finish that looks good when painted and is expensive to boot. The before and after pictures are very impressive.

looks like he uses a very small charge compared to mike though.
what charge do you use Mike?

Yep the rust tank really is pretty good - its as though you really do get something for nothing. (well, except sacrificing a couple of bits of scrap and a bag of washing soda at 75p).

I think the power supply I'm using is a 12 volt one - i'll check later if you want.

The only thing i'd bear in mind with doing something like a chassis is that it works by 'line of sight' - so the insides of, say, box section on a chassis wouldn't necessarily be de-rusted.

Hope that wasnt a brick I saw holding the car up !!!!

lol no, it's on 2 x 2 tonne axle stands positioned on the round tubes in front of the trailing arms - the brick is just to keep the propshaft up out of the way

. I even went out and bought a proper pair of chocks for the front wheels to avoid any accidents.

You can't be too careful I guess - i even have my mobile phone in my pocket when doing this kind of stuff, just in case.

Although it does look like it's sat on a brick in the one photo.

(cheers for the concern though