I abandoned the DRLs idea...because....well, no one said it - but it was stupid...so anyhow....i had purchased some H4 inner headlamps - but they were not a straight fit ..some remedial dressing was required to the headlamp bowl ring..thingee.
At the moment they only serve as beams as i need to purchase H4 connectors - they have the pilot light as well....so i will have 4X lights.. ( relay is already in place) 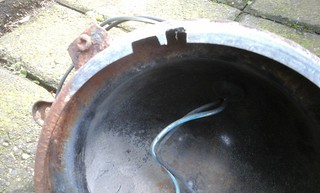 i will use the LED strip for instruments\interior.. now a bacon\egg sarnie and then greasing of trunions!!

one Silverline mini grease gun in the bin!! 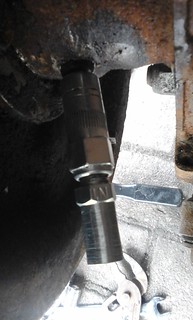 managed to just finish the rear axle greasing when that happened...

yesterday my otter\manual fan switch failed whilst heading down the M42 from Nottingham- this was at 4:30 knowing that i would hit traffic at the Birmingham A38 Junction around 5:15

- I was not looking forward to what maybe have been a blown engine.
Well i now have full faith in the cooling system at this point - the temp sat at 90 degrees whilst on the move ( 55-60 mph)- excellent
So heater on full, rear of the bonnet raised by some thick tree branch!!- we then hit the A38 junction on the M6 and sure enough traffic...the rule was if the gauge hit the 110 marker? ( one beyond the 90) i would switch off the engine and if possible pull over and endure the swearing by the nice motorists.

then i found i could not switch off the heater switch... 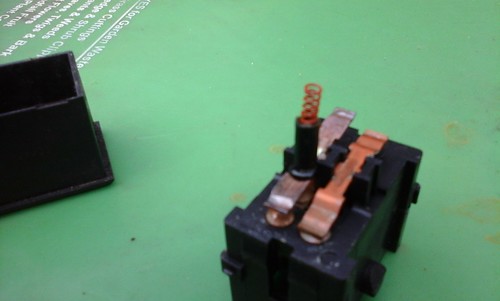 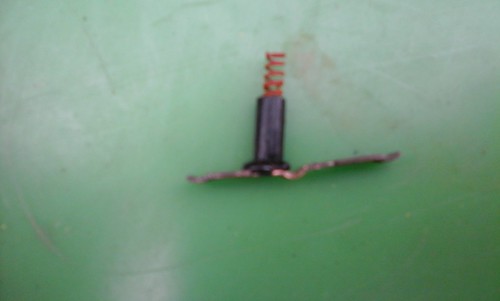 pants !!! but hopefully the engine is ok..

That GTC has been spotted a few times in and around Tamworth.

Is it the guy we met at the NEC a few years ago that runs a car cleaning products company from the old Reliant buildings in Shenstone (next to the old Norton building, now a UAV rotary engine builder)?

The car keeps being spotted up the one end of Tamworth (not far from Ricky's place).

turns out the failure was a the loose fuse holder!..should have known better!!

today i did two things - one was to replace my old otter switch with one of the newer ones- and uses zip ties for extra measure as recommended by forum users.
Two was to butcher a discarded retracting parcel shelf to fit the GTE- -i have cut the tube down and installed some brackets and it works (tensions)- just got to glue the cloth etc

I have been...secretly....taking apart a donor SE6A..mainly to practice the body\chassis separation - and the chassis appears to be in better nick than my road going one.
The plan is to refurb ( galvanise...??) the chassis and powder coat the suspension gear and hopefully within a few years- plonk my painted (to be) body .
As I am billy no mates.. 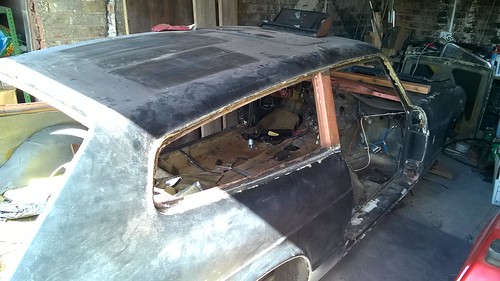 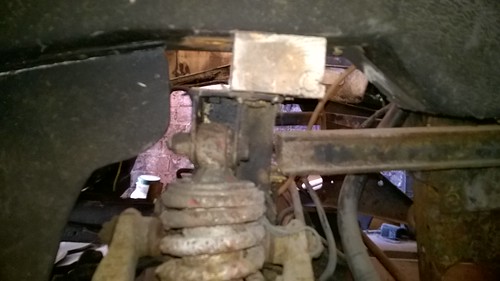 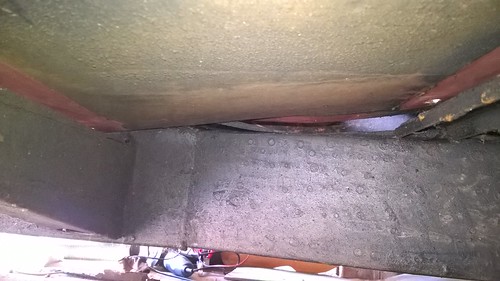 As the donor has no engine\gearbox - it suited my needs

the front is clear- but the rear seems a bit reluctant to shift- it may be the body\chassis pads stuck.
The chassis is resting on two ( 1980's) bread trolleys that we had lying around - it allowed me to manoeuvre the complete car single handed ( did i mention billy no mates...

I need to plan a body trolley in the next few weeks..

I am of course assuming a declared chassis swap will be okay....

If the body doesn't want to lift, check and check again you've not missed a bolt or fixing before trying to force it too much.

If the body doesn't want to lift, check and check again you've not missed a bolt or fixing before trying to force it too much.

will recheck the bolts ( again) next week

today my GTE failed its MOT- well it had a good run since i bought it.. but not too bad..
failed on rusty discs ( outer half inch ) and the drivers door no longer opens from the inside.

I have some new pads and discs that i purchased a few years ago so hopefully that will be sorted soon.
The door is a bit of a mystery yet- the inside handle appears to have full movement but not enough leverage to unlatch- another thing to look at over the weekend...but it's bloody cold!!!

the GTE actually failed on the pad wear and the door not opening, so this morning - replaced the pads- 30 mins max- between cups of tea and mobile calls.
The inside handle was not to able lever enough pressure to unlatch the err latch...so i squirted some plas gas on all the joins\levers- and all was good!!.
Hoping to MOT retest on Wednesday...other than the above...not much to shout about.

Whilst working away...it still surprises me the amount of attention the car gets ( esp in it's present condition) and strangers that start conversations...one which ended with me giving my number as 'his friend has a burgundy scimitar that he want to sell'...and is about 5 mins from my road.

I was working on my car at our commercial property..there is a jewelers two shops down - his son popped over and showed me his current restoration ( on phone) a silver AM DB6!!! 85K and rising ....-i have known him\family for over 20 years- and seen his varioius Lambos and Ferraris- currently he has a 308 GTB,458 Itallia, Audi S8 and 760iL......now he wants to buy mine when i finish it..!!

we are trying to save it from the scrappers

any way- next few jobs on the 6a
1.replace the valve stem seals
2. replace inlet gasket
3. fit new carb