For any general chat and banter.

Stephenl wrote: Here's the clincher for me though, that makes me think 2 gull wings. The best theory I saw is that the shell was made by "williams and pritchard" who supplied bodies and it was an iteration of this featuring the same door design and roof profile. The rear axle looks to have moved a bit though if it is/was the same car?..

But the rear end and headlight to tail fin profile is different to the yellow one.

I suspect the yellow one is the same car with a bit of "remodelling" front and rear. General proportions and the centre section look pretty much bang on though?

Surely the thing labelled as "hinge" in the earlier shot, is just the seal on the other side of the rear (almost flat) window peeping into view?

I don't believe the yellow/orange one is it, though it has some similarities - if you look at the profile of the wheelarch lips or the relationship of the door shutline to the windscreen, there are clear differences. Also the general standard of construction (even allowing for the years of decay) looks far inferior (very much "fibreglass special" territory).

Roger Pennington wrote: I don't believe the yellow/orange one is it, though it has some similarities - if you look at the profile of the wheelarch lips or the relationship of the door shutline to the windscreen, there are clear differences. Also the general standard of construction (even allowing for the years of decay) looks far inferior (very much "fibreglass special" territory).

Hadn't look too closely at all the detail differences but the rear of the door is quite different as well.

Yep, I'm with you Roger. To quote Roy Walker, IMHO the yellow Ashley is good but it's not right

Several comments on Pistonheads saying that these sorts of mystery cars are usually identified within a few days or whatever - but this one has everyone baffled despite knowing pretty much when it dates from (1960-62 I think).

Referring back to my post on page 3 of this thread, I'm personally still attracted to the idea that Hooper had a hand in it. Those weird "reverse-slope", hooded, headlamp housings are very much a Hooper hallmark. As seen, for example, on some of the "Docker Daimlers" (and on some of the production models too): 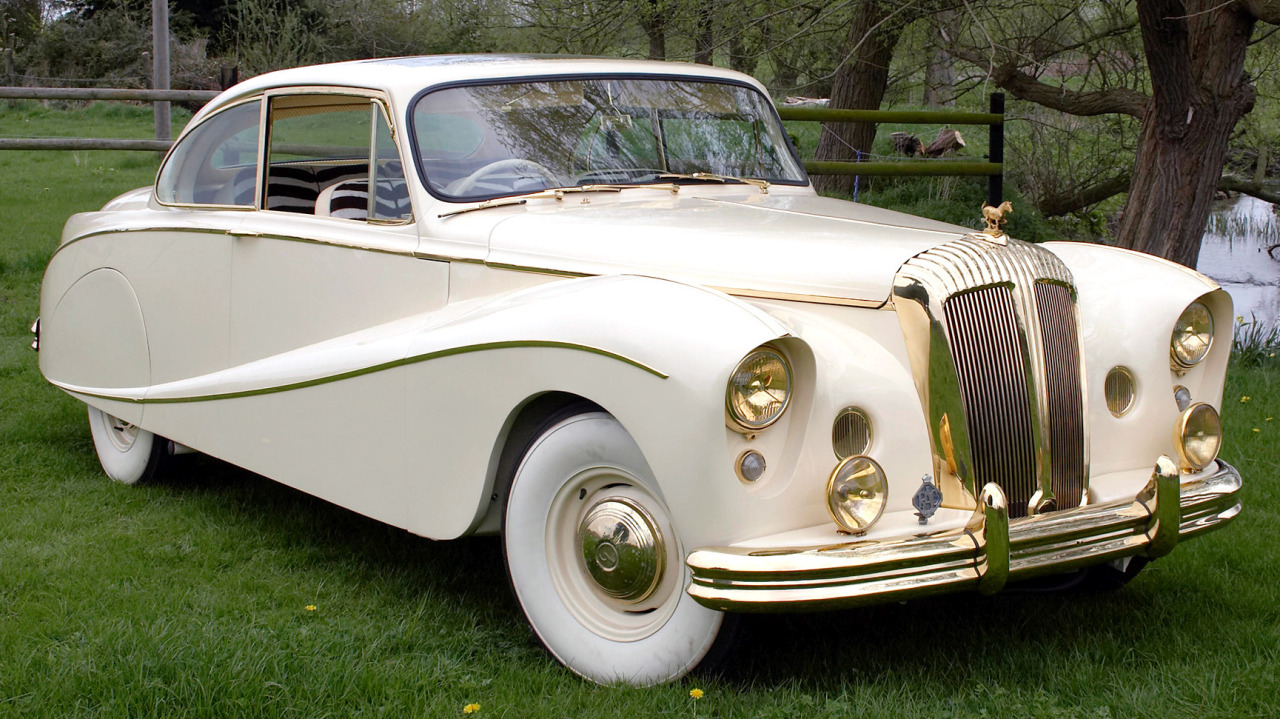 I find it hard to believe that Williams and Pritchard (who as stated, did make many bodies for the likes of Lotus) would do anything so hideous.

As an aside, it is true that a few Lotus Elevens were fitted with gullwing bodies (I believe some racing rules in the mid-'60s favoured closed bodies), I know someone who owns one. He had it rebuilt in 1985 with a standard body, which was built by Len Pritchard himself, using the original bucks and templates. The remains of the gullwing body were stored in a safe place, for posterity.

Yes I agree Roger, Does look very Hooper Empress to me.

In fact after a quick google "Hooper Empress Daimler", it is a Docker Hooper Daimler called Golden Zebra! Currently on display at The Hague

type into google "1960 gull wing doors"
four or five rows down you will find MORE pictures of this car [no lady in the way]plus the yellow/orange car. it captioned "piston heads"

Assuming I'm looking at the same pic as you are, that's simply the original shot with the lady photoshopped-out and someone's idea of what the hidden areas might look like painted-in? It does give a useful impression of what the whole thing "might" be like?

Here's a quote from the Colin Chapman archives that I think may point to W&P over any other of the myriad of small companies, due to the range of accessories they supplied. The mystery car could IMO be a test mule or customers car with Options such as the nose and gull wing roof? As aircraft men, with a background in alloy, their GRP work was top notch and perhaps even a prototype could look like a finished car with a fresh coat of paint?

Quoted by Frank Costin in Thoroughbred and Classic Car, May 1992
“I have always admired Len and Charlie’s sheer technical ability having seen them carry out almost unbelievable feats .I think I am more qualified than most to appreciate their work ;for altogether they made the bodywork for no fewer than 15 of my designs.
I don’t think they themselves recognised how great they were”

Praise indeed. Much of the success of Lotus both competitive and aesthetic [sales / appreciation etc] may be attributed to their workmanship. See our website article devoted to Aesthetic appreciation.

Williams and Pritchard poses the skill of the ultimate craftsmen in their intimacy of knowledge and empathy with materials equipped to make them designers too with a rare gift of elevating craft skill to a highly developed aesthetic based on refined sense of proportion, massing and fitness for purpose.

Posterity has not recorded if the partners completed formal apprenticeships. The quality of their work might suggest this. It has been suggested that these craftsmen acquired experience working for bespoke London coachbuilders; possibly Hooper, Park Ward or Mulliner.

During the Second World War both men turned their skills to making panels for Spitfires. This was an interesting and appropriate connection. They would have been conversant with the high level of technology used and would have easily conversed with the engineers from De Havilland that became involved in Lotus. No doubt they probably understood the reason for the exacting standards associated with aerodynamics and would execute these accurately and not merely stylistically.

Immediately post war Britain was in acute austerity but Williams and Pritchard set up together c 1948 possibly in Enfield, North London. A suggestion has been made that they undertook repair work but possibly also some work on A.C. saloons.

Within a small area of North London there was a network of skilled craftsmen some of whom had attended school together. It is both natural and convenient that they should link up especially around shared interests in Motor sport etc.

Thus one of the most significant partnerships in Motor Sport was forged. I do not think it can be under estimated that Colin Chapman the innovative designer from so early on in his career should be able to access the services of such competent craftsmen who could so thoroughly integrate ad execute the designs.

John Teychenne [Progress Chassis] possibly assisted by Len Terry [see our series on contemporaries] designed and constructed what might have been a dual sports and trails car. This was registered as YHX 344.

This car was bodied by Williams and Pritchard. John Teychenne was impressed. John was based at 19 Ribblesdale Road which was opposite the Railway Hotel and the stable block where Colin was to establish Lotus. [See photographs. The actual site is under current redevelopment] It is very possible that Progress constructed the chassis for the early Lotus trial cars but their most significant involvement came with the Lotus Mk.VI. It is believed that approximately 100 cars were built from 1952.

The semi stressed aluminium bodies for the space frame chassis were contracted to W&P. The advertisements for the period quote prices for both chassis construction and separate body work.

The production of 100 cars during this period is extremely significant. Not many present day specialist firms achieve this for one model. The prices for the period were expensive [a future article on social history will convey the relativities]. The Mk.VI enjoyed considerable success on the track within the “1172” Formula. The regular work would have employed several men.

It is believed that at a stage in the early 1950’d during the Mk.VI production life that W&P were based as part of the stable block in Tottenham Lane, Hornsey.

It has been quipped that W&P were “an arm’s length in house body work team” for Lotus at this stage.

During the 1960’s it is believed that W&P may have had additional premises in Hammersmith , West London. However by the mid 1960’s it seems that they had located at 25 First Avenue, Edmonton, London, N18.

With the development of fibre glass it was natural that W&P would be interested. Their ability to first create aluminium moulds gave them a start in the process and thereafter the commercial possibility of higher volumes.

It is believed that W&P produced a rage of fibre glass items that included bonnets for Sprites, fastbacks for Spitfires,Taga tops for M.G.’s , Broadspeed Mini panels and tops for the Élan coupe.

It is believed that sadly both craftsmen have now passed away. Although there are other skilled craftsmen the concentrations of complementary and empathetic skills were a major significance in Lotus success. The skill, dedication and goodwill of the craftsman must not be overlooked.

Look at this for a CV

Looking at the windscreen shape and in particular the cut of the door, rear wheel arch positioning etc it looks very much like a Marcos fastback gullwing.

Whats interesting is the wheel base and rear wings.

It's almost as if someone took that spare Marcos body (in the link above) and grafted it onto a Daimler Dart.

This would meet the shorter wheel base and the shape of the rear quarter wings and still keep the Marcos screen, door shape and rear arch positioning.

Have a look through the Marcos history site and drop down boxes for both their gull wings xylon, Luton and fastbacks, you'll see the striking resemblances on roof, screen, door and rear wheel arch positions to the Mystery car.